It's been a few months, but I finally have some time to sit down and blog my having completed the Austin Distance Challenge (long course), sponsored by the Austin Runners Club.  I'd done most of the events before, but decided to do the challenge itself (six races, culminating in the Austin Marathon), because I wanted to put more structure into my training for the marathon. I'd done several in the 90s, but this was my second of the century and I wanted to do better than my last one (2013).

The first race was the Run Free Texas 80s 8k (for those who don't think in metric, that's about five miles) up in Cedar Park.  Naturally enough, there were a couple of DeLoreans, each outfitted with a flux capacitor.  Time travel being what it is, they were obviously the same car but from different time periods. :-).  The course was through residential neighborhoods and parks and had some rolling hills -- nice for a beginning of the season race.

The second race of the Challenge was the Run for the Water Ten Miler.  The course was along Lady Bird Lake and up through Tarrytown and then back downtown, There were some great hills on this course and let me know I needed more hill work...And, ironically enough, it was raining. :-)
Race three was the Decker Challenge, a half marathon in early December with a course around Decker Lake.  It's notorious for hills and really bad weather.  (The last time I ran it, it was in the 40s and pouring rain).  If anything, last year, it was a bit too warm.  The hills were pretty brutal, though.
But Santa was there! 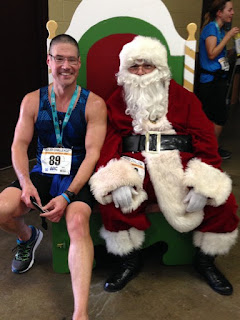 After that, we had a month break until the Rogue Distance Festival 30k (about 18.6 miles) in early January.  This one was fairly cold and probably my least favorite of the events.  It was up in Cedar Park again and ran through residential neighborhoods which was fine.  There was an issue with marking the course, though, so most of us got off track, which meant the mile markers were out of order so it was impossible to figure out a pace. (I think at some point, we were going in circles -- and ended up going about a mile farther than we should've.).  Still, it was my longest run before the marathon and I was kind of glad it happened that way.
With four events done, it was all downhill from there.  Literally.  The 3M Half Marathon starts up in the Great Hills area and runs a straight line down to downtown. It also has a swag bag filled with useful (and not so useful) 3M products.:-)
This one also started out pretty cold and way too early :-).

I really enjoyed this one, though, and it was a nice preview of many of the neighborhoods on the marathon route.
The piece de resistance, of course, was the Austin Marathon in mid-February.  I like the course, but the first time I ran the Austin Marathon, it was all downhill, starting up north and snaking its way downtown.  Now, there's a good bit of uphill until around mile 18.  I still like the course, though, and it's not like the hills from the Decker Challenge or the Run for the Water races.

I was pretty happy with my time -- my second fastest of the century!  I did it in under 4 hours, which had been my goal.  Next year, I'll work more on speed, but this time, I just wanted to not have my quads seize up in the last two miles :-).

Anyway, thanks to everyone involved in putting on the races and the challenge itself: organizers, volunteers, emergency personnel, and all the rest!  You keep Austin running!

Posted by Greg Leitich Smith at 11:59 AM