The Run Free 8K is out in Cedar Park, a considerable distance from downtown.  It leaves from one of the high school football stadiums and winds through residential neighborhoods before returning to the starting line. It's a nice start to the fall training season.

Run for the Water goes through downtown and along the lakefront. It's one of the prettiest routes in the challenge and much of it is along routes I train on.

After that came the Decker Challenge -- a hilly route just east of Austin in Decker, and notorious for terrible weather.  This year, it wasn't bad --- a bit misty with a steady drizzle. By the finish line, my glasses were so fogged up I had to take them off to see anything at all. Which made it difficult to see things like potholes...


Not on the Challenge, but still an Austin staple was the Turkey Trot!  One of the more fun races, it usually features a good number of costumes and a large helping of whimsy. 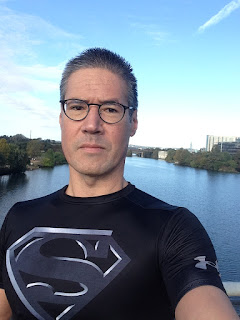 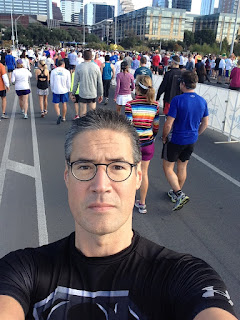 After the holidays, the next race was the 3M Half Marathon. It's almost the exact opposite to the Decker Challenge, because it's all downhill. It starts up in the Great Hills area and winds its way downtown. This year it was a particularly fast run because there was an incredible wind out of the north. Several folks, including myself, were nearly blown over as we ran past the UT football stadium.


And the last race was the Austin Marathon!

But. About three weeks before the race, in the middle of the night, I slipped and came down on the edge of my entertainment console and tile floors. Result? A nice set of bruised ribs and a strangely linear scar on my right side.

By race day, I could still feel it a bit but had gone on short runs with only minor discomfort, so I decided to go for it.  The first half went pretty well, but the second was less pleasant.  But I'm still glad I did it...


So my time for the marathon ended up being a personal worst, although I did make it under five hours :-).

Anyway, thanks to all the organizers, volunteers, emergency personnel, and everyone else involved in putting on these races! You keep Austin running!

Next up? The Capital of Texas Triathlon! Hopefully there won't be rain...

Posted by Greg Leitich Smith at 9:44 AM