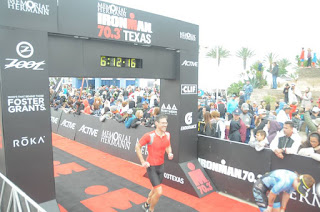 I just completed my second Ironman 70.3 ("half-Ironman") in Galveston, Texas!

It was different, but not too different than the first. In some ways it was more challenging than Austin, although I did manage to eke out a personal best, so I count myself pleased, although I've identified several areas where I can improve :-). 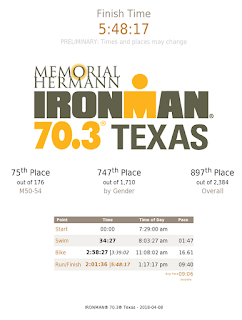 The Galveston site presented a couple more difficulties than the Austin one, viz., transportation of people and bicycles, as well as housing therefor.  The race site was at Moody Gardens, which has its own resort hotel, which we might have done if we had planned on going on Friday and staying until Monday.  Ultimately, we decided to drive down the morning before the race with our bikes, rent a house via Airbnb, and drive back the evening of the race.

With two bikes on the back, three people (and one bike) in the car, and all our gear, we were pretty packed, but the drive only took about three and a half hours, even accounting for coffee breaks.

We drove directly to Moody Gardens to pick up our race packets and drop off our bikes.  The first thing we discovered when we arrived was that it was cold and rainy and the swim venue (Offats Bayou) was a bit choppy...

Registration/packet pickup was in a big white tent overlooking the bayou (the same big white tent Moody Gardens had used for a cool dinosaur thing a couple years back).

Then you exit via the Ironman store and vendor village where you can wait in line to buy stuff.


The course talk was outside and the rain had died down enough so that it wasn't all that unpleasant. Behind us was the paddlewheeler Colonel and a whole lot of choppy water with whitecaps. We were assured that the weather could be better the next day, however. No rain and significantly less wind, although there would be a headwind on the return portion of the bike route.

The Airbnb was a nice little three-bedroom cottage about five miles from the event site and across from a large cemetery.  It had a complete kitchen that would come in useful later that night when we couldn't get into any of the nearby Italian restaurants without reservations.

That evening, we gathered all of our gear and made dinner and looked forward to the race. I went for a three mile run around the nieghborhood to loosen up a bit, and then we made dinner.

I managed to get around five or six hours of sleep and only hit the snooze button once when the alarm went off at 4:30 in the morning. After a couple cups of coffee, a banana, and a bagel, we were off!

The temperature felt good: low fifties, not too much of a breeze. I decided I didn't need gloves, but would take along my arm warmers for the bike just in case. We arrived at Moody Gardens a little after six and discovered we had had to park about a fifteen minute walk from the actual transition area.  A remarkably long line greeted us to enter transition (for body marking), but since we had already done so, we were able to get in with only a brief wait and some judicious weaving through the crowd.

There was then the ritual of putting on the wetsuit and pumping the bike tires and then transition closed! (We might have cut the timing a little close).

We then made our way separately to the swim start: they did a wave start by age group. You jump off the pier (see above map), hang around in the water for a couple minutes, and then swim like the wind when you hear the starter's horn.

The water was a nice 72 degrees, about twenty degrees warmer than the outside temperature. The water felt good, although it took a few minutes to get used to the waves and occasional mouthful of salt water. I felt pretty good, though, and noticed myself passing a lot of people.  More importantly, I managed to beat my swim time from last fall's Austin Ironman 70.3. 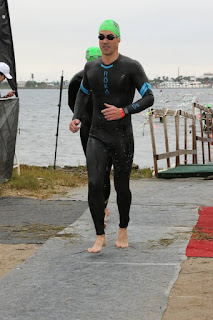 Once I was out of the water, the wetsuit strippers were efficient and I had no problem getting to my bike (even without my glasses), stowing my wetsuit and taking off. Because it was relatively warm, I decided not to bother with my sleeves, and I wouldn't have worn gloves even if I had brought them. 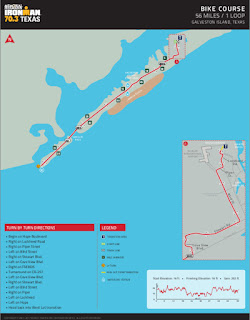 The first half of the bike portion was glorious. The temperature was perfect and I had no problems staying in aero position almost the whole way.  Unfortunately, at the turnaround, I was made to realize just how much of a tailwind I had been benefitting from. The rest of the ride felt like I was pulling a mobile home...


Also about that time, the temperature dropped by about ten degrees, and it started to rain. And then my back started to hurt from being in aero position for so long.  In short, the ride back was completely miserable...But I managed to break three hours, which had been my goal.

In addition to the lower back pain, I got a pain between my shoulders, and every time I tried to stand up in the pedals to stretch, my legs felt like they wanted to cramp up.  And my hands were so cold I could barely move them to squeeze my water bottles.


By the time I got back to transition, my hands were so numb that I couldn't operate the clip on my helmet. Putting on my shoes and tying my laces was equally an ordeal. It didn't help that my legs and abs kept cramping up when I bent to tie the laces.  After a ridiculously long transition, I made it onto the run course and my watch died. 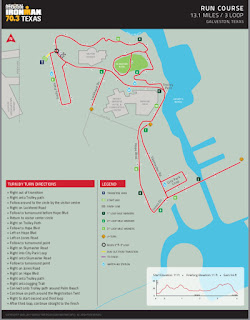 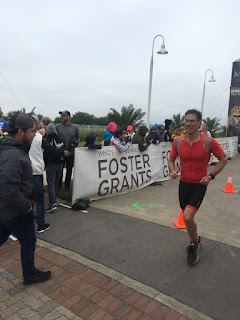 But my legs felt good and I enjoyed the run a lot more than I thought I was going to on the return bike. :-). My pacing was a bit off and I came in somewhat slower than I would've liked, but it still felt pretty good.

Overall, I came in a couple minutes better than the Austin Ironman 70.3, which I'm pleased with (although I think my run could've gone better).


All in all, it was a great experience and I'd definitely do the race again. A big thanks to all the organizers, volunteers, sponsors, and first responders who made the event a success!


Posted by Greg Leitich Smith at 8:54 AM