In the Break, by Jack Lopez Fifteen year old surfer Juan steals his mother's SUV and he and his best friend Jamie flee to Mexico (with Jamie's sister and their surfboards) after Jamie beats up his (Jamie's) abusive step-father. It's not the most well thought out idea in the world, but they figure that while hiding out, there's also the waves...

According to the jacket copy, the author, Jack Lopez, surfed in the U.S. Open Championships in Huntington Beach, as well as in Baja California and mainland Mexico. This insider expertise comes through in Juan's voice, which is redolent with passion for the sea, the waves, and the bonds of friendship. IN THE BREAK eschews "surfer dude" cliches while letting the reader understand the lure of the surf, as it explores the trio's bittersweet past and present, while offering hope for the future.
Posted by Greg Leitich Smith at 11:42 AM No comments: 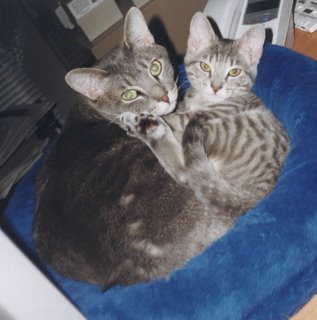 And what are you doing for Valentine's Day?
Posted by Greg Leitich Smith at 4:12 PM No comments:

The Wizard, the Witch, and Two Girls from Jersey Veronica Lopez is smart, an avid fantasy reader, and not altogether unattractive. Heather Simms is beautiful, shallow, selfish, vain, and not as dumb as you'd think. The evening before they have to deliver a book report on the classic The Queen of Twilight (Veronica's favorite novel), they are zapped into its pages through the good offices of a malfunctioning bookstore Universal Product Code reader.

All they have to do, Veronica figures, is work their way through the plot (which she knows intimately), and then the wizard Strathorn can send them back home. Things begin to go badly from the start, when they accidentally, er, expunge the Princess Arabelle, the prophesied "One," who is supposed to save the land of Galma from the evil Queen of Twilight. Throw in a talking and lascivious squirrel, a bakery elf in exile, a magic-less wizard, a whole bunch of other stuff that's not in The Queen of Twilight, and they may not survive, let alone save Galma and get back home.

This novel is hilarious -- a wonderful romp that pokes fun at the conventions of high fantasy and high school. Highly recommended.
Posted by Greg Leitich Smith at 4:16 PM 1 comment: