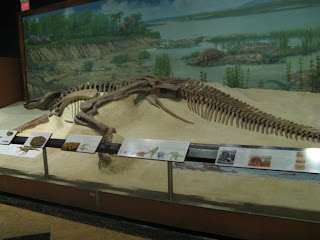 Edmontosaurus in front of mural.

A couple years ago, Cyn and I spoke to a class in Michigan at Oakland University and, as part of the research on THE CHRONAL ENGINE, we stopped by the University of Michigan Natural History Museum (Ann Arbor, MI).

This small museum on the campus of the University of Michigan has an entire floor devoted to vertebrate paleontology.

An Allosaurus is on display next to a stegosaurus "carcass," and an Edmontosaurus is laid out before a huge mural showing "now" and "then" scenes of what paleontologists thought and think its life must've been like. You can also get up close to a Deinonychus and an Ankylosaurus tail club, sauropod leg and hip bones, and see various theropod, ornithopod, and sauropod skulls. Looking up, you can also see pterosaurs and a mosasaur. 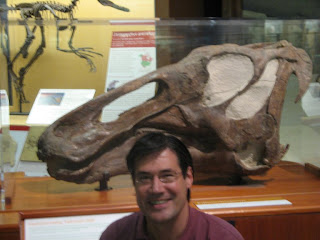 I particularly like the way the displays are laid out. You can get close enough to touch most of them (but you shouldn't :-)) and really get a feel for the size of these creatures, especially the Edmontosaurus, which stretches a good part of the width of the hall. 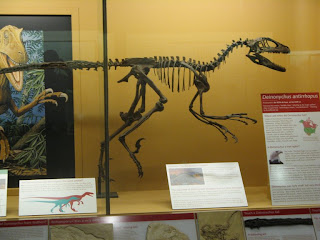 Next time you're in Ann Arbor, check it out! 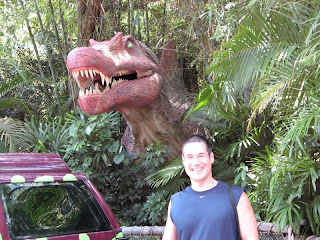 Although publication is not for a while, THE CHRONAL ENGINE is beginning to feel more and more real. My editor just sent me some amazingly cool concept sketches of interior illustrations and the manuscript itself is now off to copy-editing.

To celebrate its upcoming release, I'm starting a blog series called "Writers and Dinosaurs." The idea is to feature children's authors and illustrators in photos with dinosaurs of some kind. These can be realistic dinosaurs or skeletons from natural history museums or theme parks or can be dinosaurs of the more cartoon-y variety.

So if you're an author or illustrator and have a picture and want to be included, leave a comment with your email and I'll be in touch!

Or, e-mail me at greg AT gregleitichsmith.com
Posted by Greg Leitich Smith at 9:31 AM No comments:

WLT YA A to Z Conference!

The YA A to Z Conference: Everything You Need to Know About Writing for the Young-Adult Market, sponsored by the Writers' League of Texas, will be April 15 and April 16 at the Hyatt Regency Austin (208 Barton Springs Road). Cost: $279 WLT Members, $349 Nonmembers (through March 31). Note: conference faculty includes Cynthia and Greg Leitich Smith. The early bird registration deadline is March 31!

Check out the YA A to Z Conference FAQs!
Posted by Greg Leitich Smith at 9:43 AM No comments:

It's the 175th anniversary of the signing of the Texas Declaration of Independence, so I thought I'd do a post on big giant lizards in Houston. 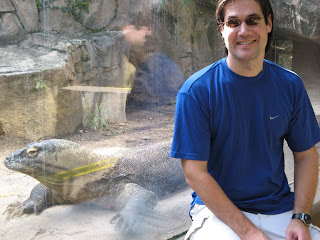 One of the more entertaining aspects of writing novels, in general, and a Cretaceous time-travel novel, in particular, is the research. With THE CHRONAL ENGINE, I had to (re)create an entire ecosystem, which provided an excuse to, among other things, go to zoos and natural history museums.

While (non-avian) dinosaurs are no longer with us, we still have the descendants and/or relatives of many creatures that survived the K-T extinction, including alligators and monitor lizards (and birds, of course). Above, is a photo of me at the Houston Zoo in front of their komodo dragon, the largest monitor lizard. Although its bite is septic, the komodo doesn't really look all that fearsome, particularly behind three-inch glass. Appearances of course can be deceiving, though, and I really wouldn't want to encounter one in the wild.

It's of particular interest to me, though, for a couple reasons: first, monitor lizards are known from the Cretaceous (dinosaurs weren't the only great big scaly things in the ecosystem back then!).

Second, it's related to the mosasaur, the orca-sized (20-30 feet long) aquatic predator from the North American inland sea of the late Cretaceous. Shown below is the Onion Creek mosasaur, on display at the Texas Memorial Museum in Austin: 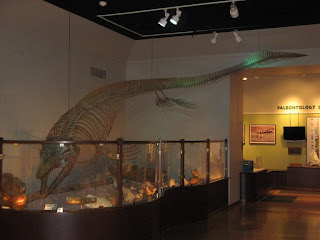 Below, I'm still at the Houston Zoo, peering at the albino alligator. 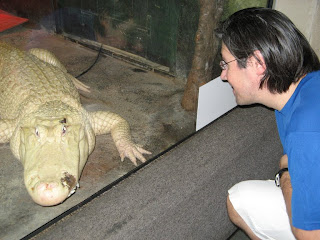 Immediately below is a close-up of the animal's forelimb. It's kind of fascinating, how much you can see of the scales on the white animal. 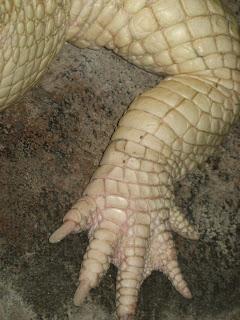 Below, at the Houston Natural Sciences Museum, I'm standing in front of what I believe is a Nile crocodile. 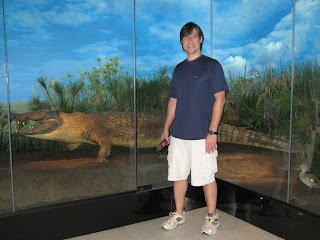 Both the alligator and the crocodile are much smaller than Deinosuchus riograndensis (found in the Big Bend area): 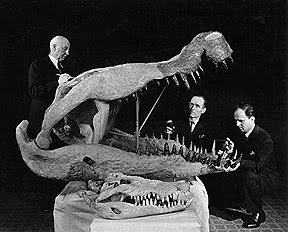 See, everything is bigger in Texas!
Posted by Greg Leitich Smith at 11:56 AM 1 comment: