In October, Cyn and I spoke at Star Lit, a fund-raiser for the Dallas Bethlehem Center. The festival housed us at the Adolphus Hotel and gave us goodie bags filled with various Dallas-themed items. One was a sample (about six inches in diameter!) of the Neiman Marcus Chocolate Chip cookie, which included a card with the recipe.

This week, we were invited to a Christmas caroling party so I decided to try it out. They're amazing. Slightly soft and chewy, but not too soft or too chewy.


Oh, and you've probably heard the urban legend. Here's all Neiman Marcus has to say on the matter:

An urban myth is a modern folk tale, its origins unknown, its believability enhanced simply by the frequency with which it is repeated. Our signature chocolate chip cookie is the subject of one such myth. If you haven't heard the story, we won't perpetuate it here. If you have, the recipe below should serve to refute it. Copy it, print it out, pass it along to friends and family. It's a terrific recipe. And it's absolutely free.

If you want the story of the myth, go here. (Interestingly, I first heard it in the context of Fannie May fudge).

Merry Christmas!
Posted by Greg Leitich Smith at 7:19 AM No comments: SKIN HUNGER: A Resurrection of Magic, Book 1, by Kathleen Duey (Atheneum, 2007)(ages 12 and up). Once, true magic existed, but long ago magicians were hunted down and killed by jealous kings. Now, with magic outlawed, there are only charlatans and frauds wearing black robes and taking advantage of the credulous or desperate. One such fraud, called in to aid Sadima's mother with her birthing, steals the family's few valuables, and leaves Sadima dying and her mother dead.

Sadima survives and discovers she has an ability to communicate with animals. At seventeen, she leaves home to seek out two young men who are determined to resurrect magic so that it can once more be used to help mankind. She's drawn to Franklin, but can't understand what binds him to Somiss, whose obsession with restoring magic does little, in her mind, to excuse barely restrained anger and cruelty.

Years later, magic has been restored and is taught at a mysterious Academy, where fewer than one in ten succeeds to become a magician, and where boys are left by their parents for fates unknown: to either become magicians or disappear forever. Hahp, second son of a wealthy merchant, is sent there because his father decided to get rid of him. Garrard, a peasant boy, is assigned as his roommate. The only thing that binds them is the consequences of failure and their fear of working together, which has been proscribed. And the latter may be their only chance to avoid the former...

Told in chapters that alternate between Sadima's story and Hahp's, SKIN HUNGER is a darkly engrossing read. Duey skillfully uses Sadima's story to illuminate Hahp's, creating characters that are expertly drawn and a fantasy world that is textured and real. Highly recommended.

Click here for an excerpt and here for an interview with Kathleen Duey.
Posted by Greg Leitich Smith at 10:10 AM No comments:

WONDERS OF THE WORLD WONDERS OF THE WORLD, by Brian Yansky, (Flux, 2007). Eric's father introduced him to the "wonders of the world"-- stories of (mostly) made-up adventure and world travel. But when Eric was twelve, his father left, never to return. His mother remarried, and they moved to Omaha.

At seventeen, Eric runs away, to escape his mother's new life and maybe find his father. Now, Eric is living on the streets of Riverton, a cesspool of gangs, junkies, murder, and sex for hire. He manages to eke out a miserable existence panhandling, along with a handful of other street kids. But then he and his ex-girlfriend attract the attention of Bluebeard, the thuggish and vicious crime boss who runs much of the vice in Riverton. Desperate to find a way out, Eric just may have a chance if only he can escape the evil Bluebeard.

See an interview with Brian Yansky at Cynsations.
Posted by Greg Leitich Smith at 6:43 AM No comments:

THE MIDDLE OF SOMEWHERE THE MIDDLE OF SOMEWHERE, by J.B. Cheaney, Knopf Books for Young Readers (2007). Twelve year-old Veronica Sparks is on a road trip across Kansas with her grandfather (a wind prospector) and hyperactive younger brother. Her attempts to take control of her own life are thwarted by her brother's impulsiveness and her grandfather's threats to take them all back home. And then her brother disappears...Warm, funny, richly drawn, and satisfying. And, hey, there's a human cannonball!
Posted by Greg Leitich Smith at 6:29 AM No comments:

WHEN FISH GOT FEET, SHARKS GOT TEETH, AND BUGS BEGAN TO SWARM 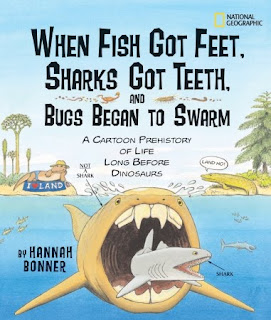 WHEN FISH GOT FEET, SHARKS GOT TEETH, AND BUGS BEGAN TO SWARM: A Cartoon Prehistory of Life Long before Dinosaurs, written and illustrated by Hannah Bonner, National Geographic (2007). Ever wonder what the world was like before the dinosaurs? In this lively picture book, author/illustrator Bonner tells of the Earth during the Silurian and Devonian periods of the Paleozoic Era, from about 430 million years ago to about 350 million years ago.

WHALE PORT, by Mark Foster, Ill. by Gerald Foster, Houghton Mifflin/Walter Lorraine Books (2007). Ages 10+. In this 64-page picture book, the father and son Fosters explore the history of New England whaling through the fictional town of Tuckanucket, from the earliest European settlers through modern regentrification. The book is structured to include an overarching narrative, with breakouts explaining each picture in greater depth. The drawings themselves are incredibly detailed, including many cutaways and perspectives. A fascinating look at a now-defunct era in the history of America and technology.
Posted by Greg Leitich Smith at 5:49 AM 1 comment: