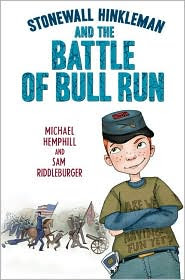 STONEWALL HINKLEMAN is an entertaining and sophisticated romp that nevertheless provides a serious look at the first battle of the Civil War. The sarcastic, first-person voice is just right and gradually grows less snarky, more thoughtful (but still full of wit), as Stonewall experiences the real, not re-enacted battle, and grows to appreciate the real people involved therein. In STONEWALL HINKLEMAN, Hemphill and Riddleburger have succeeded in the difficult task of pulling off a novel based around a grim historical event that is both fun and thought-provoking.
Posted by Greg Leitich Smith at 11:28 AM No comments:

FOOD, GIRLS, AND OTHER THINGS I CAN'T HAVE 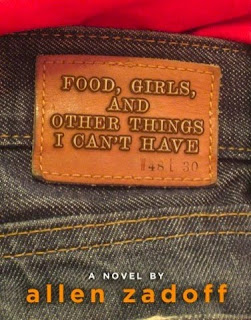 FOOD, GIRLS, AND OTHER THINGS I CAN'T HAVE, by Allen Zadoff (Egmont 2009). Sophomore Andrew Zansky has a forty-eight inch waist and weighs in at 306.4 pounds, and he's only the second fattest kid in school. His mom's a caterer, his dad's a lawyer (they're divorcing), his sister is thin, he's being plagued by a bully, and April, the girl of his dreams, just transferred in to his high school.

To impress April, he jumps at the chance to join the football team, where he's immediately made starting center and, for a while, enjoys the rise in popularity and new-found fame. But then he discovers that things just might not be as they seem...

Okay, so I haven't been blogging many books this summer, for several reasons.

First, I've been in the process of finalizing a new new manuscript and revising an old new manuscript, so that hasn't left a lot of time for extra reading or time to go to the book store.

Second, we haven't actually been receiving many books, which we had attributed to the slow economy (i.e., we assumed that publishers weren't sending out review copies to the same extent as previously). Well. We just discovered that the post office has been holding incoming packages addressed to our PO Box without letting us know they were being held (No, we don't know why). Yesterday, we went to pick up our mail, and discovered three months worth of review copies. (That's six postal bins worth). Pretty much everything from review copies from publishers and copies from individual editors and individual authors since about the beginning of June...

Oh, and am I the only one disturbed that most of the objects at IKEA labeled "bookscases" are in fact designed to hold one's television?
Posted by Greg Leitich Smith at 7:41 AM 1 comment:

More writing ...and the odd pizza

This past weekend I had the pleasure of attending a writer's workshop at the home of Austin SCBWI founder Meredith Davis. We broke into small groups to critique first ten pages of manuscripts in progress and then had workshop-wide sessions with all the participants. It was a terrific event, full of camaraderie and even some excellent writing :-).

My small group consisted of Chris Barton, Helen Hemphill, Alison Dellenbaugh, Lyn Seippel, and me. The manuscripts were all a pleasure to read -- it's always fun to peer into the creative processes of other writers.

And here's the odd pizza (from the lakefront pub we retired to afterward): 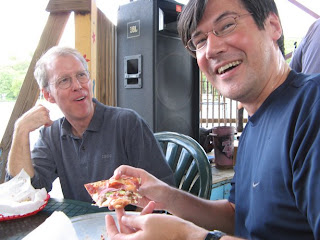