As of November 10, 2015, BORROWED TIME (the sequel to CHRONAL ENGINE) is now available in bookstores everywhere as well as online (in hardcover and ebook)!  Signed copies are available from BookPeople.

In an article titled, 'Borrowed Time' mixes paleontology and fantasy, Saturday's Austin American-Statesman had a great review of BORROWED TIME, stating it's "a slam-dunk for dinosaur aficionados and will appeal as well to those who are fans of literary time travel and outdoorsy adventure."

Sunday was the launch party at BookPeople! I had great fun doing a presentation discussing the connections between the book, Charles Umlauf, dinosaurs, Johnny Weissmuller, and me (really).

The dinosaur standees for the photo booth were a hit, as were the refreshments including water, soft drinks, wine and cheese, and crackers. (The wine, from the Languedoc region of France, is made from grapes grown in Cretaceous clays where dinosaur fossils have have been found).

But the real eye-opener was the mosasaur cake by author/cakelustrator Akiko White. About two feet high, it featured a mosasaur sculpted from modeler's chocolate on a chocolate cake base with buttercream frosting! She'll be doing a youtube video on the making of it soon (and I'll link when it's available).  Suffice to say that still pictures don't do it justice -- it was mounted on a motorized turntable and illuminated with a blue strobe that made it look like it was underwater!

Here are the pics:


Many thanks to BookPeople for hosting the event, to everyone who came for the event, and to everyone who helped out: Akiko, for making the awesome cake; Cynthia Leitich Smith; Carmen Oliver; Lindsey Lane; Shelley Ann Jackson; and Cory Putnam Oakes!

Posted by Greg Leitich Smith at 8:57 AM No comments:

Last weekend I had the pleasure of being a panelist at the first annual Mississippi Book Festival at the State Capitol in Jackson, Mississippi!


For me, the weekend started with the plane flight out on Friday and a lovely reception that evening at the Eudora Welty House. Representatives of the Eudora Welty Foundation were on hand to provide tours and answer any and all questions about Jackson's favorite daughter.  It was a great chance to talk to the organizers and volunteers, as well as other authors.

The next morning was breakfast at the Winter Archives Building, where the staff gave us a tour and showed us the forthcoming Museum of Civil Rights and Mississippi History Museum.

Then we were off to opening ceremonies, where the Jackson State University Marching Band performed on the Capitol steps, and then the panels!  The Harper Lee Reconsidered panel, held in the old Supreme Court chamber, was lively and fascinating (and also covered by C-SPAN).  I wasn't able to make it to the picture books panel due to the long line, but hear it went well, and I'd had the chance to talk with the presenters the night before :-).

My panel was the Young Readers panel, and featured moderator Margaret McMullan, and panelists Kimberly Willis Holt, Taylor Kitchings, Deborah Wiles, Carolyn Brown, and Cassie Beasley.  Margaret did a great job as moderator and kept the conversation going and on track. :-).

Many thanks to all the organizers, volunteers, sponsors, and attendees for making the event such a success!

Altogether, it was a fantastic event, with standing-room-only crowds and a terrific venue!  Here's a report on the festival from the Clarion-Ledger: Book Festival Attendance Outpaces Projections.

And here are some pics from out and about festival weekend:

Pizza a Day Diet: The Backspace

The Backspace, located at Fifth and San Jacinto, was recommended to me by author Margo Rabb: 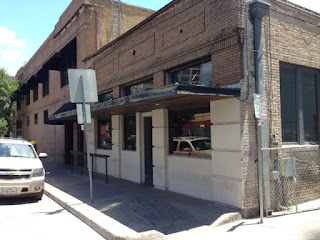 It's a relatively small space, with correspondingly limited seating.  All seats have a good view of the bar and the brick oven, though (They're bigger than they look). 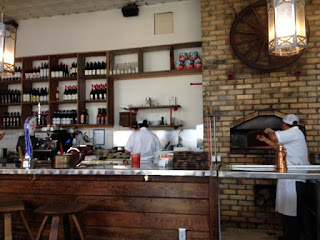 I ordered the asparagus appetizer and a fennel sausage pizza and really liked both. 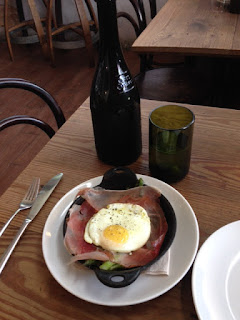 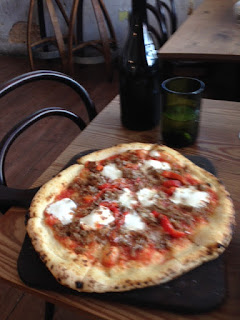 The appetizer came in a cast iron skillet with a fried egg, basil pesto, and prosciutto, and had a nice, earthy quality.  In the future, I fully intend to try some of their other appetizers...

The pizza's crust was somewhat soft, but it had a good chewiness and rich flavor from the slight char/caramelization.  The sauce was chunky and the fennel sausage was really amazing.  I also liked the "blobs" of mozzarella that worked better on this pizza than an entire layer would've (I suspect the effect would've been to steam the crust a bit too much).

Although their web site doesn't specify, they also do carry out, which could be dangerous...


Posted by Greg Leitich Smith at 6:59 PM No comments:

For today's Pizza a Day Diet experience, I went way out west -- nearly to Dripping Springs -- to try out Pieous with authors Brian Yansky and Frances Yansky. 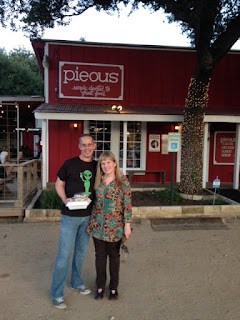 The place was packed -- and inside seating is limited to a handful of cafe tables, picnic tables, and seats at the bar.  There's more outside, though, and we didn't have trouble nabbing spots. 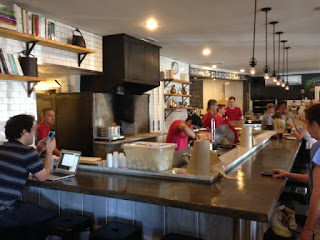 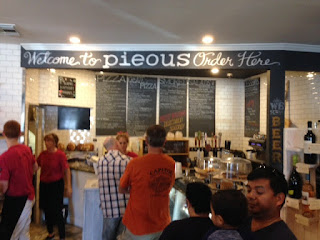 The pizzas are about 12 inches, so we ordered three: the Smoky Italian (crushed tomatoes, fresh mozzarella, house smoked Italian sausage, and spicy onions), the White Pie (mozzarella, basil, garlic, and olive oil), and a bacon pizza. 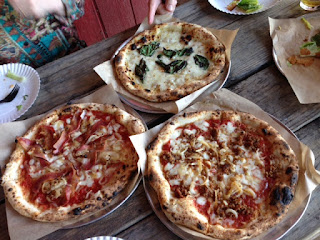 I didn't have the bacon, but I enjoyed both of the others.  The crusts were soft but chewy, and the cheese (and sauce on the sausage) were flavorful.  The White had a rich, almost Alfredo-like taste, and the Smoky Italian sausage was also really good.  I particularly liked the hint of spiciness that you got in every mouthful.

And fans of TOFU AND T.REX will appreciate the old-school deli slicing machine: 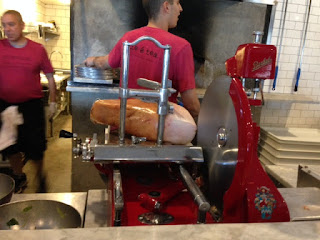 Posted by Greg Leitich Smith at 7:03 PM No comments: 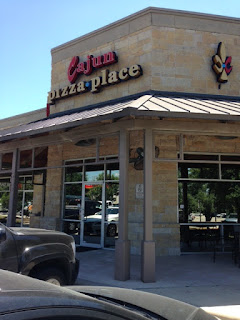 At first, I was a bit skeptical about Cajun Pizza Place, partly because of its relatively remote location: 183 and McNeil (aka, South Canada), but I was in the area so decided to try it. 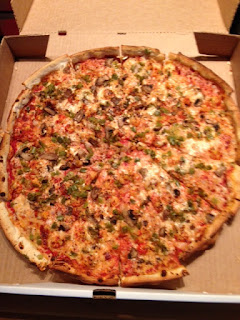 As you can see, the toppings are present in abundance and evenly distributed.  The crawfish was actually really good and had excellent flavor and body (I was prepared for frozen, textureless mush) and the pizza on the whole was quite rich and tasty.  I also liked the crust: thin, crisp and flaky in a way that reminded me of the thin crust pizzas from neighborhood joints I had in Chicago growing up.

They are a bit far from me but if I'm ever in the neighborhood again, I'll definitely go back.

Posted by Greg Leitich Smith at 8:57 PM No comments: 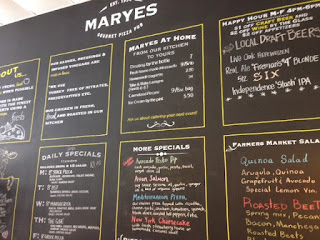 Marye's Gourmet Pizza Pub is located somewhat out of the way in a strip mall on Bee Cave Road in West Lake Hills and offers pizzas, sandwiches, and other Italian favorites in a new, modern setting. 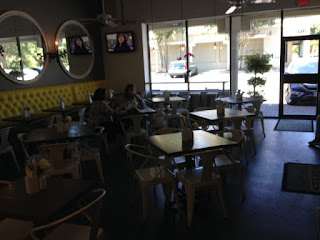 I ordered a 14-inch sausage, green pepper, and mushroom pizza. 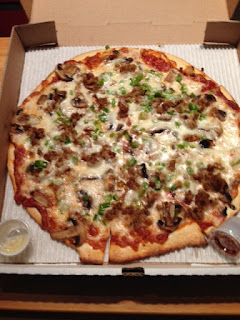 I ordered this one carry out and it took me a while to get there and get back home, but it held up well.  The crust was nicely thin with crispier edges.  The cheese was great and there's a lot of it.  The sausage was crumbled but tasty and nicely caramelized, and the green peppers and mushrooms were conspicuously abundant.  Altogether, a most enjoyable pizza.


Posted by Greg Leitich Smith at 5:29 PM No comments: 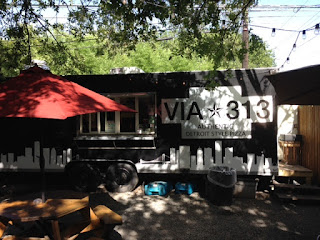 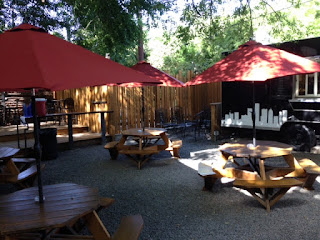 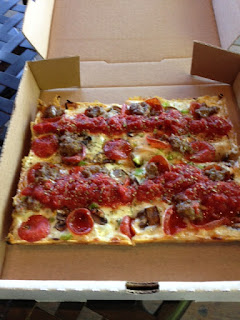 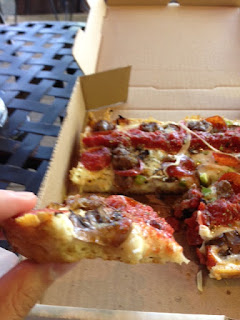 Posted by Greg Leitich Smith at 5:52 PM No comments: 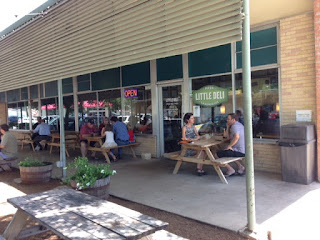 Little Deli and Pizza is located in a mid-century strip mall in a residential (Crestview) neighborhood of north-ish Austin and, as the name suggests, doesn't have a lot of dine-in space; it does have a number of outdoor tables which were packed when I picked up my sausage, mushroom, and onion pizza.

This was another where I really liked the sausage -- it had a good, meaty texture and flavor and came in large chunks.  It's thin crust, not extremely crispy, but with enough body to support the weight of the toppings, and was satisfyingly chewy. 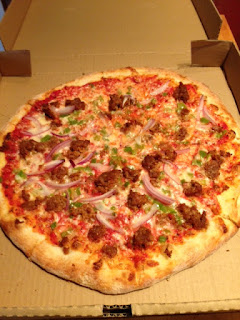 Posted by Greg Leitich Smith at 6:00 PM No comments: 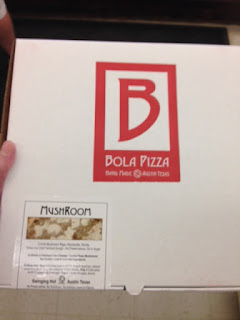 Today's pizza comes from Bola Pizza.  Actually, it comes from Thom's Market grocery store, because Bola Pizza is a home-grown Austin catering-only outfit (they'll bring the oven to you, which sounds kind of awesome) that also offers some of their selections frozen.

I bought the Mushroom, one of four varieties -- all vegetarian -- available in the freezer case (Their catering menu features eleven, including some with meat :-)). The Mushroom pizza has a "crimini mushroom ragu, mozzarella, and ricotta."  Here's what it looked like out of the box: 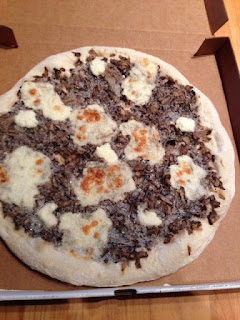 And here it is straight out of the oven: 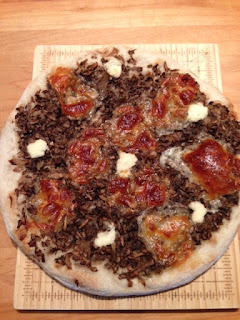 Judging from their web site, one of Bola Pizza's points of pride is their crust, billed as being made with a "three day, cold fermentation" process.  And I have to say, it was pretty fantastic.  Extremely thin, straight out of the oven it had a terrific crispness (Part of this might be because it was a "white" pizza, i.e., no sauce so they can go a little thinner.). The edges (is there a term for those?) were crisp on the outside and chewy on the inside. 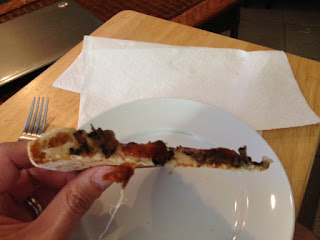 The rest of the pizza was really good, as well, with a light, flavorful, non-greasy texture.  Even better, the cheese tasted the way cheese should (not just a waxy, gooey substrate) and the mushroom ragu would be terrific by itself. On the whole, this might be the best thin-crust frozen pizza I've ever had, better than some in-store or delivery.

The pizzas are available at stores in Austin, San Antonio, Houston, Dallas and Fort Worth.  Click here for the complete list.

Posted by Greg Leitich Smith at 6:55 PM No comments: