A Happy and Prosperous 2009 to everyone!

This post is to highlight some of the 2008 books I've read, particularly enjoyed, and blogged in 2008.

Caveats: (1) It is not intended to be comprehensive. (2) Really, all the books I've blogged this year are, in some sense, favorites. (3) I am still reading 2008 books and will likely blog some in the future. (4) I have read and enjoyed many more 2008 books than I have had a chance to blog and will likely add them to the blog in 2009.

The Postcard, by Tony Abbott
The Underneath, by Kathi Appelt
Every Soul a Star, by Wendy Mass
Antsy Does Time, by Neal Shusterman
The Floating Circus, by Tracie Vaughn Zimmer

Lincoln Shot, by Barry Denenberg
Me Hungry!, by Jeremy Tankard
Posted by Greg Leitich Smith at 6:35 AM No comments: 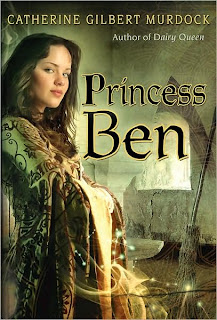 PRINCESS BEN, by Catherine Gilbert Murdock (Houghton Mifflin 2008)(ages 10+). Princess Benevolence has been content living with her parents, the king's brother and sister-in-law, in small quarters outside the palace. Despite being heir to the throne, she's never had any desire to learn the stuff of rulership.

But when her parents and the king are assassinated, she falls under the thumb of the Queen, who is insistent upon her learning all that she has hitherto neglected. When the queen locks Ben into the highest tower in the castle, the princess discovers a book on how to do magic, which can set her free.
But with war in the offing, will that be enough to save the kingdom?

PRINCESS BEN is a fun, lively fantasy, full of personal and political machinations, and a little bit of magic.
Posted by Greg Leitich Smith at 10:04 AM No comments:

EVERY SOUL A STAR 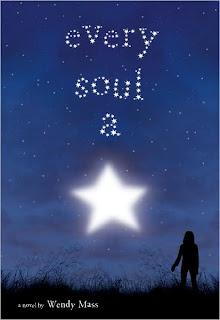 EVERY SOUL A STAR, by Wendy Mass (Little, Brown 2008)(ages 8-12). Ally, who has lived at the remote Moon Shadow campground for as long as she can remember, is passionate about stars, comets, and asteroids. Bree, beautiful and popular, is on the cusp of (she thinks) a career in modeling and seeks only to maintain herself on the A-list of popularity. Jack, overweight and awkward, just wants to be left alone.

But the occasion of the first total eclipse to be visible in the continental United States (in nearly a century) has drawn them (and thousands of others) together at the Moon Shadow campground, run by Ally's parents. Over the next two weeks, the three grow to appreciate each other, the search for exoplanets, and the wonders of the universe.

In EVERY SOUL A STAR, Mass expertly weaves together the threads of the teens' lives and delivers an intricately-wrought story of unlikely friendship, discovering oneself, and star stuff.
Posted by Greg Leitich Smith at 9:28 AM 2 comments:

THE CITY IN THE LAKE 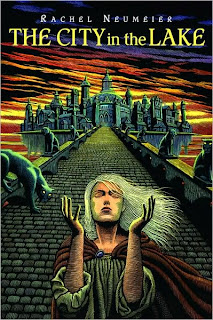 THE CITY IN THE LAKE, by Rachel Neumeier (Knopf 2008). Old magic is stirring at the borders of the Kingdom, until now held at bay by the "Kingdom's Heart," mysteriously associated with the king's son, Prince Cassiel. When the prince goes missing, the entire kingdom is affected by stillbirths and other strange occurrences.

In a small, remote village, the mage Kapoen, who is training his seventeen-year old daughter Timou in his craft, suddenly leaves to find answers in the capital city. But when he disappears, Timou decides to undertake the dangerous journey herself. Can Timou save her father, the Prince, and the Kingdom?

In this elegant first novel, Neumeier presents an atmospheric world of intrigue and treachery. Characters and setting are finely wrought and the story is suspenseful and gripping. Highly recommended.
Posted by Greg Leitich Smith at 6:55 AM No comments: 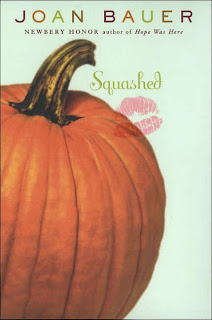 SQUASHED, by Joan Bauer (Putnam 2001). Ellie Morgan has a dream: to grow the biggest pumpkin in Iowa and beat that black-hearted Cyril Pool once and for all. But an unsympathetic dad, pumpkin thieves, and bad weather get in the way. Can Ellie win the competition (and the boy) and stay true to herself (whoever that might be)?

An oldie but a goodie: Joan Bauer's first novel (and winner of the Delacorte Prize in 1992), SQUASHED, is a funny, heartwarming story about family, love, friendship, finding out who you are, and giant vegetables. Highly recommended.
Posted by Greg Leitich Smith at 7:00 AM No comments: 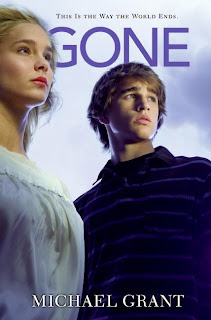 GONE, by Michael Grant (HarperTeen 2008). To Sam and his best friend Quinn, the coastal California town of San Perdido is beyond boring, except when they are able to get on their boards and do some surfing.

And then, everything changes: instantly, everyone over 15 years old is gone. Disappeared. A barrier wall has appeared around the town, the animals are mysteriously "mutating," and some of the kids are developing strange powers.

Part HEROES, part LORD OF THE FLIES, GONE is a fun, fast, accessible read that nevertheless provides substance for the thoughtful reader.

GONE is the first book in a new series; book 2, HUNGER, is forthcoming in May 2009.
Posted by Greg Leitich Smith at 6:58 AM No comments: 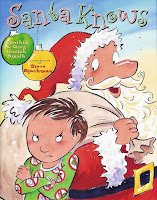 The Bookkids blog over at the Book People web site has a great couple posts up featuring books by Austin authors, including Santa Knows, about which they say it's "[p]erfect for skeptics and believers of all ages[;] Cynthia and Greg Leitich Smith are a force to be reckoned with, especially when it comes to believing in Santa!"

Click for picture books or for middle grade and YA (which they call chapter books and teen book, respectively).

Also, Teri Lesesne, the goddess of YA literature, has a post about Cyn's forthcoming novel, Eternal. Teri says, "[a]ction, bloodlusting, angels, and quite a bit of dark humor will make this one a winner among the evergrowing crowd of fans of the dark tales of the vampires."

Thanks guys!
Posted by Greg Leitich Smith at 8:09 AM 1 comment: 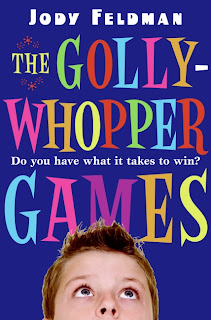 THE GOLLYWHOPPER GAMES, by Jody Feldman (Greenwillow, 2008). Gil Goodman knows everything about the Golly Toy and Game Company, thanks in part to the fact that his father used to work there. At least, until the Incident. Now Gil would do anything to get out of Orchard Heights, the company town, and leave the entire Incident behind.

His only chance of making that happen, though, is to win The Gollywhopper Games, a competition sponsored by the company and involving stunts, puzzles, and assorted other endeavors related to the company's history. Can Gil win the games and save his family?

THE GOLLYWHOPPER GAMES is imaginative and fun, the puzzles and stunts creative and thought-provoking. Readers will cheer for Gil to win.
Posted by Greg Leitich Smith at 10:36 AM No comments: 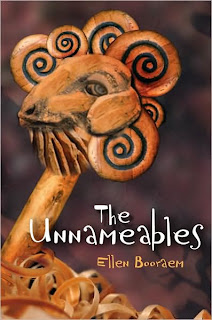 THE UNNAMEABLES, by Ellen Booraem (Harcourt 2008). On the strangely (and secularly) puritanical Island, everything is named after its purpose and everyone is named after his occupation, except for Medford Runyuin, a former mainlander, who was saved from a shipwreck by his parents (who themselves didn't survive).

On the Island, everything impractical is deemed "unnameable," and can get you exiled. So Medford knows he must keep secret and hide the wood carvings he feels compelled to make. This becomes immeasurably more difficult when the Goatman, who has strange wind powers, appears and wreaks havoc on both the physical and cultural structure of Island.

THE UNNAMEABLES offers a fascinating and creepy, yet believable culture; a well-drawn world with compelling and likeable heroes; and intriguing conflicts.
Posted by Greg Leitich Smith at 10:18 AM No comments:

HOW NOT TO BE POPULAR 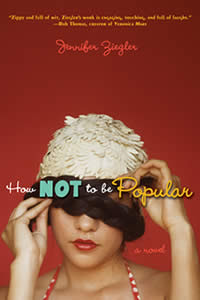 HOW NOT TO BE POPULAR, by Jennifer Ziegler (Delacorte 2008). Sugar Magnolia ("Maggie") Dempsey's parents, aging hippies, never stay in one place more than a few months and she's getting sick of it. When her parents decide to move from Portland, Oregon, to Austin, Texas, Maggie's had it. She's tired of losing friends and boyfriends and hurting so much when it comes time to leave (again). So she hits on a plan: she will be the antithesis of "popular," thereby driving away anyone who might befriend her. Naturally, there are complications...

HOW NOT TO BE POPULAR offers a hilarious take on popularity and fitting in. The novel is laugh-out-loud funny and offers well-drawn characters in convincing relationships as it builds to a sweet and satisfying conlusion.
Posted by Greg Leitich Smith at 10:11 AM No comments: