So my plan to do my first triathlon in twenty years on Monday didn't turn out so well.

A lot. But not so much in town.

At Camp Mabry, just north of central Austin, we got less than an inch of rain last Thursday. At Bergstrom Airport, just south and east of downtown, they got about nine inches.  And it was much worse farther east, along the Colorado River (which also runs through Austin).

On Friday and Saturday, it rained in the Hill Country.  West of Austin.  Upriver.

On Sunday, there was the CapTexTri expo and packet pickup and bike dropoff.
It was clear and sunny.  But because of all the rain, the LCRA opened at least one floodgate from the Tom Miller Dam, releasing water into Lady Bird Lake.  Which was where the swim portion of the CapTexTri was supposed to take place.

At the course talk at the expo, they announced that there was a flow of about 3 mph and they were considering changing the course so that it ran point to point (downriver).


Later that day, they announced the swim was canceled.  Which was disappointing, but I've weathered a couple of triathlons in Chicago where that had happened and one when it probably should've.

Monday, race day, I awoke at 5 AM, fed the cats, ate breakfast and drank coffee, and then I heard rain.  Lots of rain.

Nevertheless (discovering, to my chagrin, that I am apparently an optimist), I headed out.  When I arrived at the transition area, I was told it was closed, and that we should shelter at Palmer Events Center or its garage.  This was around 6-620. 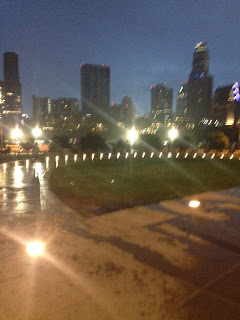 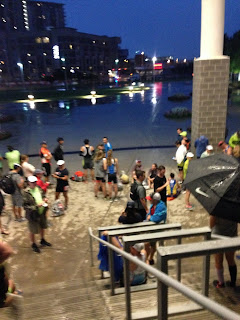 In the garage and on the deck of the Palmer Events Center, folks seemed to take things in stride and with humor.  Some people were concerned about hairpin turns on a wet course, but were generally willing to take it slow.

We heard a tentative plan to cut short the bike portion to 20k, but the rain and lightning continued. Finally, at around 830, race officials called off the bike portion entirely because of flooding on the course. 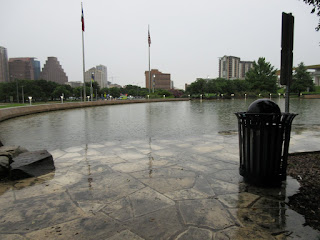 They announced that Olympic distance participants could do a 10k, while sprint participants could do a 5k and that start time would be at 10 am. Most folks removed their bikes and went home or back to their hotels. There was some grumbling -- last year the event had been cut short due to flooding, as well, and I gather there had been similar problems in 2014, too. 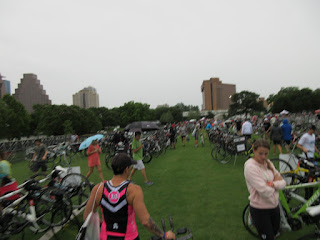 I took my bike back to my car, but decided that I'd gotten up at five that morning to run a race and so, I was going to do one.  Besides, I didn't want to waste all those carbs I'd eaten in the past few days. :-).


Turned out, there were only about 200 of us who stuck around for the 10k, with another 150 for the 5k (out of around 3000 original participants), but everyone seemed to be having a good time.  I was pretty happy with my race -- I'm not sure it was exactly 10k, but I still did one of my better overall times and paces. At least this century :-).
On the whole, it was a bit surreal but fun, although in the moment sometimes frustrating.  And, in retrospect, kind of funny.  I think the organizers did a good job under trying conditions and kept us pretty well informed via social media.  So, thanks (And I am really glad I wasn't in charge :-)).  Thanks also to all the volunteers who stuck around to the bitter end. 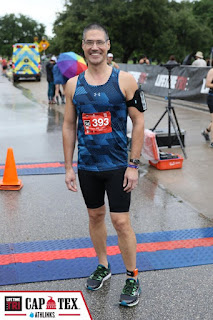 Oh, and I actually ended up getting a bit of a tan. 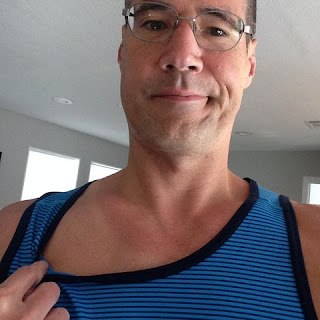 Here's what the lake looked like Tuesday morning (Normally, there is no current at all):


Posted by Greg Leitich Smith at 10:05 AM No comments: