A Dino a Day Special: Illustration by C.S. Jennings

I am delighted to present this awesome illustration by author/illustrator C.S. ("Christopher") Jennings!  Cyn and I had the pleasure of meeting Christopher a couple years back at the Austin Comic Con, where we discussed the possibility of his doing a dino-related sketch for me.  We talked over a couple ideas until I did the A Dino a Day Strikes Back feature last fall to celebrate the release of CHRONAL ENGINE in paperback, and then Christopher did THIS: 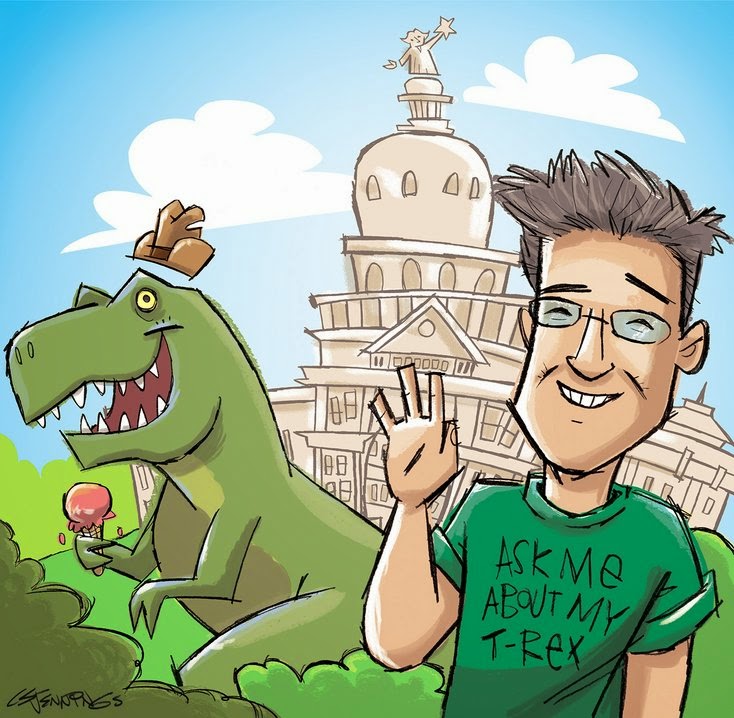 Per his web site, "C.S. Jennings is a professional illustrator specializing in concept work, children's, and editorial illustration. He brings top shelf know-how to the publishing, gaming, editorial, and entertainment industries. (Did we tell you about that one time when he was an animation lead for Richard Linklater's "A Scanner Darkly?" That was pretty cool.) He's an author too, which he is doing more of these days. He calls Austin, Texas home. He has an extensive hat collection, many too hot to wear in his home state."

Christopher was also gracious enough to take the time to answer a couple of questions.
Both of my recent novels (CHRONAL ENGINE and LITTLE GREEN MEN AT THE MERCURY INN) feature illustrations.  You've illustrated picture books and graphic novels, as well as the Jacob Wonderbar series (written by Nathan Bransford) of middle grade novels.  Can you tell us a bit about how you approach illustrating for a novel?  Is it different than illustrating for a picture book?   Or graphic novel?

Illustrating for a chapter book definitely offers a different experience from picture books and graphic novels. First off, the approach to the characters has to change. My picture book characters are more round, soft. Chapter books are aimed at an older group, so the edges get sharper, the characters pulled and stretched to be taller. The themes in the older books are darker too, and this translates into the illustrations. There may be more shadow applied, heavier line in the art, more grim expressions or character design.

Chapter books and graphic novels, well … Graphic novels have 200 times the illustration in them, whereas chapter books feature mostly spot illustrations. When I approach graphic novel characters I try to keep things simple. One book I did, the character had a red striped shirt on. Drawing all those stripes probably added 15 hours to the book. Also, the characters in chapter books are black and white (in the interior). The tonal pallet is greatly reduced, with a smaller spectrum within to communicate. This is also defined by the printing process and the generally lower quality paper printed upon. Anything over 30% black gets too dark really quickly, anything under 5% disappears.

What does your average day (when you're working on a project) look like?

I have a day job, so I come home, eat a quick dinner, and get into the studio as quickly as I can. I begin each project by listing out the illustrations in a checklist. I make a column for each step--roughs, revisions, final line, adding tones, how much time it will take, that kind of stuff. I try to spend time with the manuscript section I am illustrating that day beforehand to let my brain start chewing on the images. After that, it's warm up time at the drawing table, getting to the place where my brain and my hand line up. Then it's off to the races (the tasks that evening defined by the checklist). I play loud music in the studio. It helps to create a fully immersive environment. Some people can watch TV and work. I can't. I need it to be my pencil, my paper, and my hand. All else exists outside that bubble.

You are a member of the Armadillustrators, a consortium of Austin illustrators.  Can you tell us a bit about that?
Critique groups!!!! EVERYONE should be in one. We meet once a month. Our group talks not just about illustration, but also writing. The group discussion is open and fair, with each member free to say what he sees in the illustrations or text. It's so great (and important, I think) to get another set of eyes on your work. They see things you don't, elements that aren't working, as well as those that can help the story. The ideas offered up are for the taking, or can be disregarded. This group has been key to the development of myself and my work. I am so fortunate to have this group.

You also write your own books.  Can you tell us a bit about how you look at the intersection of text and art when it's your own? 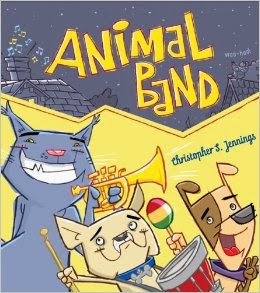 Hmmm. Great question. I write picture books and board books, so I'll talk about the relationship from there first. Text and art work hand in hand. When I am writing, I pare down the words. What's the LEAST I can say for this scene? I try to stay aware of "showing and not telling." For instance, if the character is going to pour water out of a bucket, I don't write, "Mr. Jimbers picked up the bucket and poured the water out." He is holding the bucket in the illustration, so I can cut those words. "Mr. Jimbers poured the water out." Can I shorten it even more? Mr. Jimbers is tipping the bucket, blue stuff is coming out …. "Mr. Jimbers poured." In a picture book the drawing does so much of the work. Emotion, characters cues, time, and place are defined by the drawings. There is a concept in the industry that says you should be able to still understand the picture book without the words. (Which makes sense as so many in the audience cannot actually read.)

When I receive a manuscript for a chapter book, I am looking for the places in the text where I can share moments that will grip the reader. Whether it's an emotion, some fun character, or cool element, I ask myself, "What would I want to see as the reader?" Admittedly, sometimes it's "What do I want to draw?" "Ah, sweet! Spaceships!" or, "this character is awesome!" Sometimes it's a wacko character design. Other times, as in the Jacob Wonderbar books, it's someone historical. "Einstein! Napoleon? I've always wanted to do draw them!" I am chomping at the bit to draw Teddy Roosevelt.

Thanks!  For more information, Christopher's web site is here and his twitter handle is @dajanx

Above are a couple of the "inspiration pieces" for the illustration above (photos by Sam Bond Photography).

And here are links to the rest: