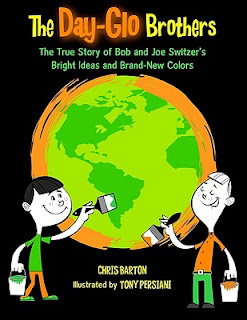 THE DAY-GLO BROTHERS: THE TRUE STORY OF BOB AND JOE SWITZER'S BRIGHT IDEAS AND BRAND-NEW COLORS, by Chris Barton, ill. by Tony Persiani (Charlesbridge 2009). In this stunning picture book, Chris Barton presents the true story of the two brothers who invented the now uniquitous "day-glo" colors: an amazing tale of perseverance, hard work, and how one's dreams can take one on different and unexpectedly satisfying paths.

Persiani's illustrations offer a bright and charming accompaniment to the story arc, as they begin in a drab black-and-white world and (vaguely reminiscent of movie of The Wizard of Oz) ultimately culminate in one filled with the fluorescent colors we know today .
Posted by Greg Leitich Smith at 5:39 PM 1 comment:

By now (and by the mercy of Divine Providence) the Texas legislature (aka, the Lege [pronounced like "ledge"]) has left town (unfortunately, however, they didn't finish all the stuff they were supposed to, so they might be coming back); ordinarily, however, we would be free of them for another two years.

During their session, however, among their other important duties, they did manage to sneak a change into the designation of the Official Dinosaur of the State of Texas (which now goes to the governor for signature).

Apparently, back in 1997, paleontologists discovered some bones near Glen Rose, Texas, which they dated to the early Cretaceous. Glen Rose, of course, is the site of the famous dinosaur trackways (sauropod, theropod, and ornithopod) that are on display at the American Museum of Natural History in New York (No, not all the tracks are there; some are at the Texas Memorial Museum on the UT campus and others remain in the Paluxy River in what is now Dinosaur Valley State Park).

The 1997 bones, which were put on display at the Fort Worth Museum of Science and History, were attributed to "pleurocoelus," a brachiosaur-type sauropod which was originally discovered somewhere out East in the early twentieth century ("pleurocoelus" is now considered by some to be a "waste-basket" taxon, meaning that it's a genus folks just "dump" dinosaurs in when they don't know how else to categorize them). The 1997 Texas legislature, in their infinite wisdom, nevertheless named pleurocoelus the state dinosaur.

Recently, however, paleontologists discovered that the Texas bones they had called "pleurocoelus" are in fact an entirely new (hitherto undiscovered) genus they have called "paluxysaurus," after the Paluxy River; it, too, is apparently related to brachiosaurus. Consequently, and because that which we call a rose would smell as sweet, the Lege stripped pleurocoelus of its august status and designated paluxysaurus the state dinosaur in its place.

There's also (apparently*) the possibility that the tracks were made not by the dinosaur whose bones are now called "paluxysaurus," but by an even larger brachiosaurid called "sauroposeidon." (Poseidon was also god of earthquakes).

Sadly, however, actual sauroposeidon fossils have been found only in Oklahoma (and I believe is, or is soon to be, on display at the Sam Noble Museum of Natural History in Norman)...

But did I mention it's the biggest dinosaur ever found in North America?

THE DEMON'S LEXICON, by Sarah Rees Brennan (McElderry 2009). Sixteen year old Nick and his older brother Alan (and their insane mother) have been on the run from demon-calling magicians ever since their father died eight years ago. Keeping mostly to themselves, they're used to packing up and moving at a moment's notice.

But when Alan agrees to help Jamie and Mae (a brother and sister from Nick's school) remove demon "marks" that mean almost certain death, the brothers are drawn into troubles not their own. And as they help the pair, Nick becomes aware that maybe he hasn't been told the truth about his own past...

THE DEMON'S LEXICON is a terrific read, rich in atmosphere and wit. Best of all, the relationships between and among the pairs of siblings are thoughtfully constructed (to explore what it means to be family), without stinting on either horror, action, or suspense.
Posted by Greg Leitich Smith at 5:23 AM No comments: