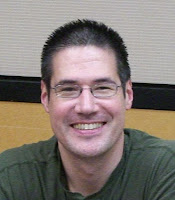 His latest release is CHRONAL ENGINE (Clarion/Houghton Mifflin Harcourt 2012)(ages 9+).  It’s a mystery-adventure time-travel story about three teens who use their reclusive grandfather’s time machine to travel back to the Age of Dinosaurs to rescue their kidnapped sister and solve a family mystery.

He looks forward to the Spring 2014 release of LITTLE GREEN MEN AT THE MERCURY INN (Roaring Brook/Macmillan)(ages 8+), a comedic middle grade novel about what happens to three friends at a motel in Cocoa Beach, Florida, when a manned space launch at Kennedy Space Center is scrubbed due to the appearance of an unidentified flying object over Cape Canaveral.

Greg is co-author (with his wife, New York Times best-selling author Cynthia Leitich Smith) of the picture book SANTA KNOWS (Dutton 2006) and the young adult short story "The Wrath of Dawn," which appeared in the GEEKTASTIC (Little Brown 2009) anthology.

For more information about Greg, and a calendar of appearances, visit his official web site.