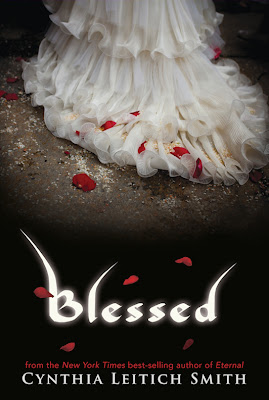 Posted by Greg Leitich Smith at 10:25 AM No comments:

"Portals to Imagined Worlds" and Other Texas Book Festival Notes 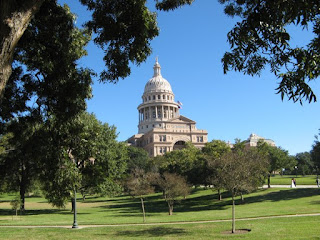 The schedule for this year's Texas Book Festival (October 16-17) has just been published. Go check it out. It's got this great interactive thing where you can click on each of the panels and presentations to define your own, personalized schedule.

Here's what Cyn and I are going to be up to:

From 2-2:30 on Sunday, Cynthia will be presenting HOLLER LOUDLY in the Children's Read Me a Story Tent. Signing will be at the Children's Signing Tent (13th and Colorado) immediately (15 min) afterward. 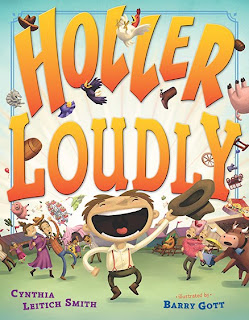 At 3 PM Sunday, in Capitol Auditorium, Room E1.004, I will be introducing author M.T. Anderson, who will be speaking on, among other things, Agent Q, his latest "Pals in Peril" novel. 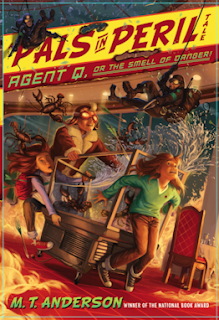 Note: Times and rooms may be subject to change. Make sure to check the final schedule.
Posted by Greg Leitich Smith at 1:06 PM No comments: 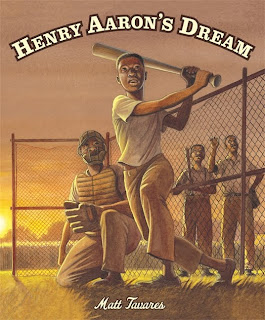 HENRY AARON'S DREAM, by Matt Tavares (Candlewick 2010)(ages 8-10). Young Henry Aaron had always dreamt of becoming a major league baseball player. So he dedicated himself to that task, practicing at every opportunity. It still seemed impossible, in the 1940s, in segregated Alabama. But, then, Jackie Robinson burst onto the scene and Henry's dream seemed just a little more real.

So he worked even harder, playing first in the Negro League and then in the minors, until in 1954, he earned a position with the Milwaukee Braves. And, then, twenty years later, he broke Babe Ruth's home run record...

HENRY AARON'S DREAM is an uplifting and heartwarming account of how, through perseverance and ignoring the nay-sayers, Hank Aaron made it to the Major Leagues to become baseball's home run king.

Personal Note: I remember how excited my brother and I were when my mom took us to see the Braves play the Cubs at Wrigley Field that summer, and especially the ovation Hank Aaron received when he came up to bat. It was the first time I'd ever seen the fans stand up en masse and applaud a player on another team.
Posted by Greg Leitich Smith at 9:47 AM No comments: 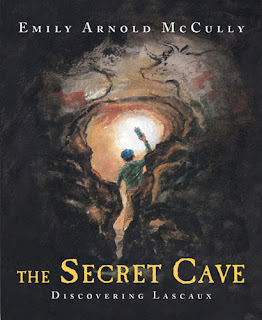 THE SECRET CAVE: DISCOVERING LASCAUX, by Emily Arnold McCully (FSG 2010)(ages 6-9). Almost exactly seventy years ago, four boys stumbled upon one of the cultural treasures of the world: the Paleolithic cave paintings at Lascaux.

THE SECRET CAVE provides a fictionalized account of that discovery - four boys, seeking hidden treasure, find a hidden cave and go exploring...But how will they keep their find a secret?

Story and art are intriguing and suitably evocative: the brightness of the French countryside is contrasted nicely with the mysterious darkness of the caves, and scope of the Paleolithic art is merely hinted at. An excellent introduction to human prehistory.
Posted by Greg Leitich Smith at 9:38 AM No comments: 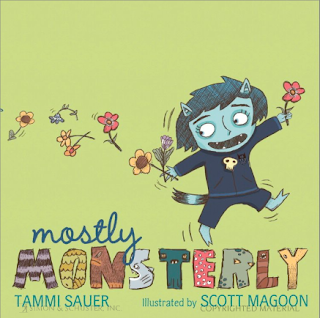 MOSTLY MONSTERLY, by Tammi Sauer, ill. by Scott Magoon (Paula Wiseman/Simon & Shuster 2010)(ages 4-8). Bernadette is a monster, but she's secretly very, very nice. On her first day of monster school, this doesn't go over very well. Will Bernadette ever be able to reconcile her inner self with societal expectations?

MOSTLY MONSTERLY is a terrifically fun, funny, and fanciful story of a little monster who just wants to be herself. With cupcakes.
Posted by Greg Leitich Smith at 7:57 AM 1 comment: 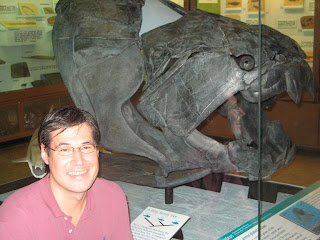 Thanks, everyone, for all the congratulations and good wishes, here, elsewhere on the Internet, and in person! Looking forward to 2012!

Note: Above photo is of dunkleosteus, a placoderm (armored fish) from the late Devonian (predated the dinosaurs by millions of years, but it's still really cool-looking.). I like the picture, taken at the University of Michigan Natural History Museum, in part because the reflection makes it look like my head is in the thing's mouth. :-).

A good introduction to the Devonian is here.
Posted by Greg Leitich Smith at 7:45 AM No comments:

BIG NEWS! THE CHRONAL ENGINE: AHEAD OF TIME 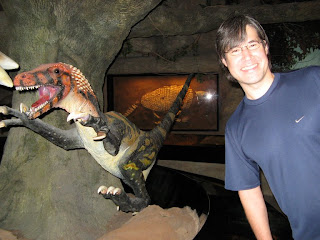 I am delighted to announce that Clarion Books (Houghton Mifflin Harcourt) will be publishing my new novel, THE CHRONAL ENGINE: AHEAD OF TIME (tentative title). Tentative pub date is 2012.

Thanks to my agent, Ginger Knowlton, and new editor, Daniel Nayeri (co-author (with his sister Dina) of the ANOTHER series from Candlewick)! 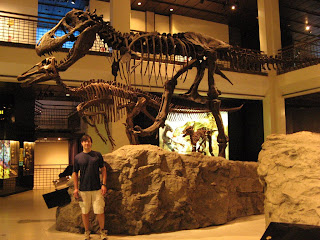 Per today's Publisher's Marketplace: "Using their reclusive grandfather's time machine, a trio of contemporary teens travel to the Age of the Dinosaurs to solve a family mystery and rescue their sister..." 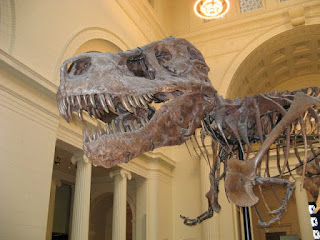