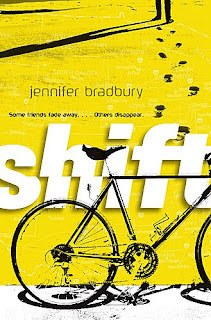 The summer before they head off to college, Chris Collins and his best friend Win Coggans are on the adventure of a lifetime: a cross-country bicycle trip from their home in West Virginia to Seattle. But after two months in the saddle during which their friendship (and sometime rivalry) is tested to the breaking point, they separate. Chris ultimately makes it to the coast without Win and hops a bus back home.

Win, however, isn't there. And he still isn't back when Chris leaves for Georgia Tech.

Win's well-connected father suspects Chris has something to do with Win's disappearance...and then the FBI show up at Chris's dorm.

Making skillful use of flashbacks to tell the story, Bradbury does a terrific job of balancing details of the bicycle trek with development of the relationship between the friends (and their parents), and Chris's attempts to uncover/accept what really happened. Part road trip, part mystery, SHIFT is at all times compelling and thought-provoking.
Posted by Greg Leitich Smith at 10:18 PM