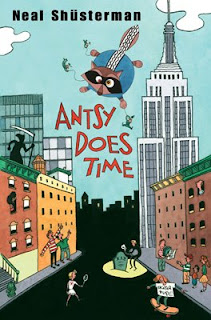 ANTSY DOES TIME, by Neal Shusterman (Dutton 2008). Antsy Bonano, the hero of THE SCHWA WAS HERE, is back (and now a freshman in high school). After witnessing an accidental death at the Macy's Thanksgiving Day Parade, his friend Gunnar Umlaut announces that he has mere months to live. In a fit of exasperation (as the pair work on a project about Steinbeck's The Grapes of Wrath), Antsy "bequeaths" one month of his life to Gunnar. Soon, other kids and teachers are likewise bequeathing periods of their own lives, as Antsy's act of (perceived) compassion becomes public and a sort of market develops, with Antsy becoming the arbitrage "Master of Time."

As the situation threatens to explode out of control, Antsy knows he must take it down a notch as (while dating Gunnar's older sister and working in his father's restaurant) he realizes that all is not well in the Umlaut household (or his own, for that matter).

With an utterly engaging narrator (and narrative voice), ANTSY DOES TIME is an altogether funny, thoughtful, and thought-provoking novel about life, death, friendship, and family. Highly recommended.
Posted by Greg Leitich Smith at 12:51 AM