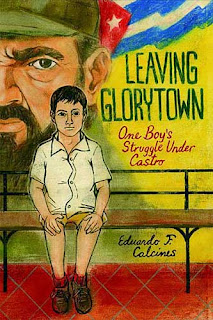 LEAVING GLORYTOWN: One Boy's Struggle Under Castro, by Eduardo Calcines (FSG, 2009)(10-14). In this memoir, Calcines (b. 1955) provides a fascinating (and sometimes chilling) look at how his family's lives -- and the lives of other middle class Cubans -- were affected by the thuggery of the Castro regime.

Calcines artfully portrays the frustrations of daily life in communist Cuba and his family's decade-long quest for freedom (until, finally, in 1969, they are allowed to leave everything and everyone behind to come to America).

Throughout LEAVING GLORYTOWN, Calcines's humor and love for family and friends shine through, even in the toughest of times. From beginning to end, LEAVING GLORYTOWN is an affecting story of faith, family, love, and hope. Highly recommended.
Posted by Greg Leitich Smith at 5:33 AM