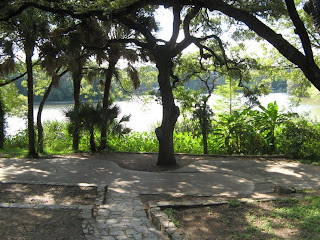 Austin doesn't have quite the level of museums of Houston, Dallas, San Antonio, and Fort Worth, but Cyn and I recently discovered the Austin Museum Partnership, a consortium of most of Austin's museums, and decided to check out and/or revisit some of them.

Last weekend, we hit the Austin Museum of Art's Laguna Gloria Art Museum and, just down the street, the Texas Military Forces Museum.

The Laguna Gloria is located on the former estate of Clara Driscoll. The Italianate mansion and grounds are absolutely gorgeous and almost overwhelm the artwork inside. The new Art and Nature exhibition is well worth seeing, though. The AMOA also runs classes out of new classrooms and studio space on the grounds; and the facility is available for rental and weddings.

The Texas Military Forces Museum, located at Camp Mabry, is not 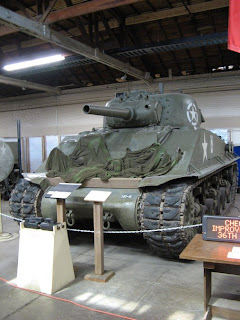 nearly so prepossessing. The museum is, however, in the process of implementing a new master plan. Its collection is extensive and impressive. Particularly noteworthy, I thought, are the tank display outside, and the exhibits on Texas cavalry, Texas Medal of Honor recipients, the USS Houston, and the 36th Texas Infantry Division (including the 442nd Regimental Combat team).

Next up: The Texas Memorial Museum and the Harry Ransom Center.
Posted by Greg Leitich Smith at 6:42 AM

Hey, I just did Camp Mabry a few weeks ago with the Cub Scouts. Didn't you LOVE the dioramas? It makes me want to start making them. Especially the Italy one. WOW!
I need a new hobby.

Yeah, the dioramas were great. I also liked the Alamo -- very different from today!