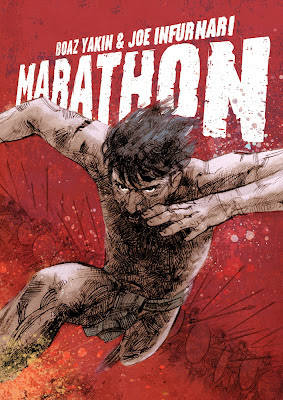 MARATHON, by Boaz Yakin, ill. by Joe Infurnari (First Second/Macmillan 2012)(ages 12+).  In 490 BC, Athens defeated the armies of Darius of Persia at Marathon.  An epochal moment in Western Civilization, its aftermath begat multiple legends of a remarkable runner, Pheidippides or Eccles, depending on whose version you read.  In some stories, as the Persians were about to land, he raced from Athens to Sparta -- about 140 miles -- in the hopes that the Spartans would lend their martial vigor to the defense of Greece.  In others, he ran from the plains of Marathon to Athens -- a mere 24 or so miles -- to bring news of victory.

In this remarkable graphic novel -- a poignant and compelling historical fantasy -- Yakin and Infurnari square the circle, telling the story of both runs, the tale of the son of a slave, his athletic prowess, and his love for family and country.
Posted by Greg Leitich Smith at 7:56 PM