THE UNDERNEATH, by Kathi Appelt 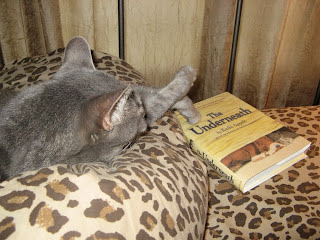 THE UNDERNEATH, by Kathi Appelt (Atheneum 2008)(ages 10+), is a gripping story of cats, dogs, cruelty, love, and ancient and contemporary evil.

A pregnant calico cat is abandoned by the side of the road in the piney woods and swamps of east Texas. Before long, she comes upon Ranger, a bloodhound who's been chained to a stake by his cruel master, Gar Face. Despite Ranger's warnings about his master, they become the only friends each has known in years. The cat gives birth to a pair of kittens, Sabine and Puck, who are likewise instructed to stay "underneath," i.e., beneath the porch so that Gar Face won't ever catch them. But, of course, kittens are curious...

A thousand years ago, "Grandmother" Moccasin, a giant lamia, was captured and placed into a jar buried beneath a giant loblolly pine. Today, she is seeking to escape and wreak vengeance on those who captured her and stole her daughter...

In THE UNDERNEATH, Appelt expertly weaves these seemingly-disparate threads together in a compelling and highly satisfying fashion. Told in a voice that resonates with the rhythms and timbres of east Texas, THE UNDERNEATH is sometimes dark, yet is also heart-warming and profound.

COMMENT: THE UNDERNEATH is a Writefest novel; Cyn and I are deeply honored that it was dedicated to us.
Posted by Greg Leitich Smith at 10:15 AM