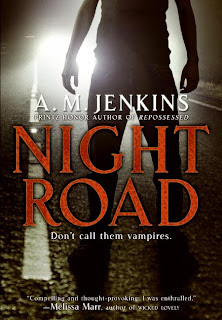 NIGHT ROAD, by A.M. Jenkins, (HarperTeen 2008 )(ages 12+). Cole is a "hemovore," a virally-infected being who subsists on blood and who is apparently immortal (hemes heal rapidly from almost any injury, although exposure to sunlight can result in permanent mental disability). To all outward appearances a teen-ager of about 18, Cole is really more than a century old, which has given him perspective: On how to combat the Thirst and avoid killing when drawing blood from "omnis" (as mortal humans are called); on how to avoid becoming too attached to particular omnis; and on how to stay below the radar of omni authorities.

For years, Cole has held himself aloof from the community, but now he's called back to handle an "accident:" an accidentally-created and newly-formed heme named Gordo. Together, Cole and his easy-going friend Sandor take Gordo on a cross-country expedition to teach him how to become a heme, without killing any omnis or inflicting eternal, debilitating injuries upon himself.

In NIGHT ROAD, Jenkins provides a rich and atmospheric urban fantasy world and artfully juxtaposes Gordo's and Cole's experiences coming to terms with being eternal. NIGHT ROAD is another winner from the author of the Printz honor book REPOSSESSED.
Posted by Greg Leitich Smith at 12:16 PM