A CONSPIRACY OF KINGS 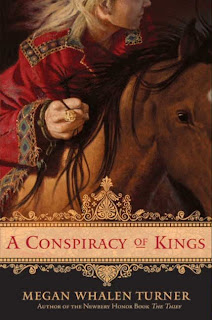 A CONSPIRACY OF KINGS, by Megan Whalen Turner (Greenwillow/HarperCollins 2010)(ages 12+) is the deliciously Machiavellian follow-up to THE THIEF, THE QUEEN OF ATTOLIA, and THE KING OF ATTOLIA.

In brief, it is the story of the quest of Sophos, erstwhile companion of the Thief of Eddis, to secure the throne of Sounis: Effete and affable, Sophos is kidnapped in a coup attempt by fractious barons (but abetted by the ambassador from the Medan empire) against his uncle. His only hope is to bide his time and escape to Attolia. But can Eugenides himself, even with the aid of both Attolia and Eddis, harden him enough to help unite the peninsula against the Mede?

Once again, richly-drawn and sometimes disturbing characters and political and diplomatic intrigue abound in this in-one-sitting read.
Posted by Greg Leitich Smith at 7:29 AM