TRUTH WITH A CAPITAL T 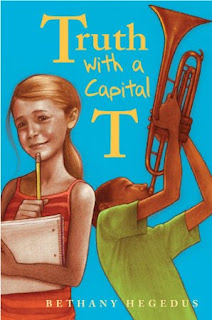 Worse, Maebelle has been dropped from the Gifted and Talented program at her school. Can she find her talent in time for the town's anniversary celebration and return to Atlanta at summer's end? And what's with the deal with the mansion's locked wing?

TRUTH WITH A CAPITAL T is an enjoyable, honest, and thought-provoking story of friendship, history, and family secrets. Told with humor and full of Southern charm and wit, TRUTH WITH THE CAPITAL T will have readers wanting to march right down to Tweedle, Gerogia in time for the festivities.
Posted by Greg Leitich Smith at 10:24 AM