Uncle Beazley gets a facelift.

Who's Uncle Beazley? The Triceratops from THE ENORMOUS EGG, one of my favorite books as a kid. A couple years ago, I did a post on that and some other books I'd read as a child to see how well they'd held up. Here's the entry for THE ENORMOUS EGG:

What I remember of the story: Nate Twitchell lives on a farm in rural New Hampshire. One of his hens lays the eponymous egg, which hatches into a live Triceratops...which Nate now has responsibility for...

The rest of the recollection: This is another that we owned. I thought this one was terrific -- the idea that Nate got to spend a month at the Smithsonian and spend a good part of it walking a live dinosaur on the Washington Mall was really appealing.

And now: This one has held up surprisingly well. The voice is still fresh and un-self-conscious. Okay, I don't quite completely buy the whole plot arc with the Senate, but the senator himself is (still) absolutely hilarious. The drawings are also still pretty accurate (although the idea of Triceratops posture has changed somewhat since 1956). 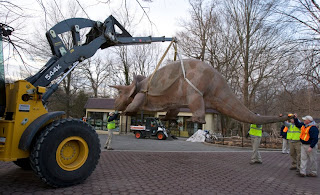 So, anyway, I knew there had been a statue made of Uncle Beazley and that it had been on display in front of the National Museum of Natural History. I may even have seen it there when I was a kid, but it wasn't there when Cyn and I went for National Book Festival.

Apparently, Uncle Beazley's permanent home now is in front of a prehistoric garden at the National Zoo. A couple days ago, he was taken off for a much-needed facelift. He returns in mid-March.

Take a look at the pictures and story from NPR here. And here's the official press release.
Posted by Greg Leitich Smith at 3:18 PM