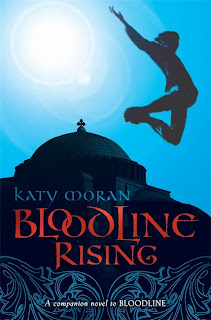 BLOODLINE RISING, by Katy Moran (Candlewick 2011)(ages 10+). This companion to BLOODLINE features the story of Cai, a young thief in 7th century Constantinople. Kidnapped by a rival, he is taken on a slave ship to Britain, his parents' homeland.

There, he is bought by a clan chief, who knew his father, and is put to work spying on rival factions. But those around him know more about his past than they're saying...When it comes time to choose, where will his loyalties lie?

A compelling and richly-drawn historical fantasy, BLOODLINE RISING offers plenty of action and adventure in the exotic realms of the 7th century. Cai is believable, likeable, and occasionally ruthless as he pursues his place in the world.
Posted by Greg Leitich Smith at 7:29 AM