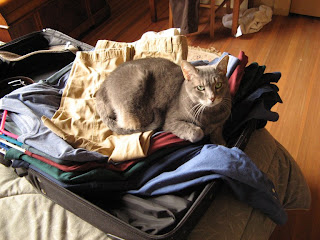 I, Mercury, would like to present another feline-themed picture book for your edification.  The book in question concerns an orange tabby (not properly silver, but one can't have everything) and is based on a tale that is some centuries old.

I refer, of course, to PUSS IN BOOTS, by Charles Perrault, translated by Malcolm Arthur, and exquisitely illustrated by Fred Marcellino.  Originally published in 1990, the book won a Caldecott Honor medal in 1991, and is now available in paperback from Square Fish. 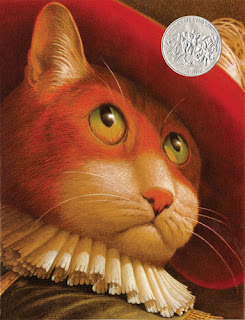 The story concerns the third son of a recently-deceased miller who is at first disappointed that his share of the inheritance is the eponymous cat.  Indeed, the miller's son at first wants to eat the cat and make a muff out of his fur.

The son, however, is wise enough to listen to Puss and buys him a pair of boots.  I, Mercury, confess I do not understand this.  Human garments are useful to cats only as makeshift bedding (See above photo), and their footwear not at all.  But I digress.

Through the ingenuity of Puss, the miller's son eventually comes to marry a princess and inherit a vast estate.  Oh, there are also ogres and much feasting and other hijinks.

Enjoy.  And, remember, cats are not to be trifled with.
Posted by Greg Leitich Smith at 7:41 AM

I do love Mercury's reviews. His voice has a sort of sardonic hiss to it.