Save the Dinosaur Tracks! [Updated] 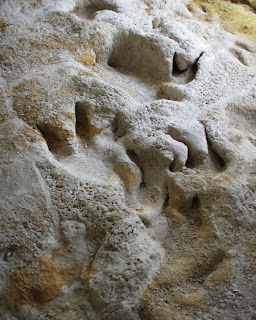 A couple weeks ago, I ran a post about Massachusetts schoolboy Pliny Moody, who dug up dinosaur tracks on his family farm and is credited with the first authenticated dinosaur track discovery in North America.

Closer to home, though, dinosaur trackways are known from at least fifty locations throughout Texas.  Among the most famous are the trackways in Glen Rose, on a portion of the Paluxy River now part of Dinosaur Valley State Park.  The trackways extend over a large area of what was once a coastal plain, on the shores of the Western Interior Seaway.

In 1938, Roland T. Bird excavated portions of the tracks, taking them back to the American Museum of Natural History, where they are still on display.

Another portion of the trackways is currently housed at the Texas Memorial Museum, where they have been on display in a building outside the museum since 1941.  The tracks include those of a sauropod (probably Paluxysaurus, but possibly Sauroposeidon) and a theropod (probably Acrocanthosaurus).

The problem is that the building is non-climate-controlled and, apparently, is built on a slab of non-reinforced concrete.  This has led to a degradation of the stone the trackways are formed in, which could eventually lead to the complete loss of slab.

But plans are afoot to move the trackways indoors, into the Hall of Geology and Paleontology.  The museum and the Texas Natural Sciences Center have begun a fundraising campaign to preserve and move the trackways.  Go here to check out information on donating to Save the Dinosaur Tracks!

Update:  Take a look at an article in the July 4, 2011 American-Statesman about the tracks here.
Posted by Greg Leitich Smith at 12:51 PM