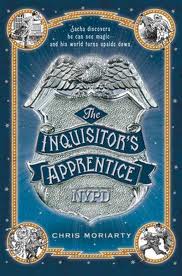 THE INQUISITOR'S APPRENTICE, by Pat Moriarty  ill. by Mark Edward Geyer (Houghton Mifflin Harcourt 2011)(ages 10+).  In New York City, in the first decade of the Twentieth Century, magic is illegal, although almost everyone practices it.  When it's discovered that thirteen-year-old Sacha Kessler -- the son of Russian Jewish immigrants -- can see witches, he's apprenticed to the famous Inquistor Wolf, whose job it is to stop magical crime.  Their first case is to prevent the murder to Thomas Edison, but the main suspect is a rabbi, and the truth might just come a little too close to home for Sacha...

THE INQUISITOR'S APPRENTICE offers an atmospheric and believable alternate history, a fascinating and occasionally humorous melting-pot world of magic and ethnicities, and an engaging protagonist.  First in a series.
Posted by Greg Leitich Smith at 8:23 AM