How Much for That Dinosaur in the Window? [UPDATED AND BUMPED] 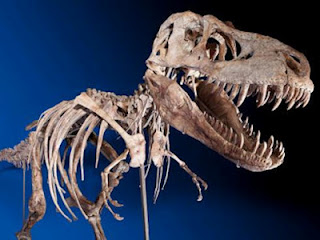 Last weekend saw a bit of (still ongoing) intrigue in the paleo-world.

As reported by Britain's Daily Mail newspaper on Thursday, Dallas-based Heritage Auctions had scheduled a fossil auction in New York City, including a 25-foot long, 8-foot tall mounted specimen of Tarbosaurus (or Tyrannosaurus) bataar.  T.bataar is basically an Asian version of Tyrannosaurus rex and, indeed, may belong to the same genus.  So far as is known, T.bataar is found only in the Nemegt Formation of the Gobi Desert of Mongolia and, possibly China.

According to the Daily Mail, the specimen was found in Mongolia and acquired by a British collector in 2005.  The collector


assembled and mounted half the specimen but because the project proved quite expensive he struck a deal with a fellow enthusiast in America who helped fund it.  The half-built dinosaur was shipped across the Atlantic to Florida where it was completed.

The Daily Mail article goes on to quote a representative of Heritage Auctions as saying that "the specimen was found over ten years ago in the Gobi Desert."

Apart from the usual concern about scientifically interesting specimens falling into private hands, why was there intrigue?  Well, on Thursday, a letter, by Mark Norell, of the American Museum of Natural History, was posted cross several paleo mailing lists.  It read, in relevant part:


As someone who is intimately familiar with these faunas, these specimens were undoubtedly looted from Mongolia. There is no legal mechanism (nor has there been for over 50 years) to remove vertebrate fossil material from Mongolia. These specimens are the patrimony of the Mongolian people and should be in a museum in Mongolia. As a professional paleontologist, am appalled that these illegally collected specimens (with no associated documents regarding provenance) are being are being sold at auction.

The President of Mongolia issued a letter expressing concern, as did a representative of the Mongolian Academy of Sciences:


The auctioning of such specimens fuels the illegal fossil trade and must be stopped.  If you could provide detailed information on the provenance(s) of these specimens, I will then pass on this information to the President of Mongolia....I strongly urge you not to auction the other specimens we have indicated until their legality is fully resolved.  Even if the owner indicates that they did not come from Mongolia, we suggest that you investigate this matter closely as sometimes collectors falsify information or documents to make illegal specimens appear ":legal".

We have asked Mongolia if they had failed to tell us of a known prohibition preventing auction, and so far they have not.  Our consignor is an individual with a good reputation and he has warrantied in writing to us that he holds clear title to the specimen.

Later, on the Heritage Auctions web site, he reiterates that "[w]e have legal assurances from our reputable consignors that the specimen was obtained legally. As far as we know, the Mongolian government has not produced any evidence that the piece originated in its territory."

Then, on Saturday, the day before the auction, the Mongolian government's Houston-based law firm obtained a temporary restraining order from a state court in Dallas to delay the auction.  The original petition is here and the text of the TRO is here.

In response, Heritage Auctions went ahead, announcing before the sale that "[t]he sale of this next lot will be contingent on a satisfactory resolution of a court proceeding dealing with this matter."  According to their web site, "Mongolia’s Texas-based attorney, without authority from the New York judicial system, tried to interrupt the auction."  [Comment: I find it slightly curious that they took the matter to state, rather than federal court.].

For its part, Painter Law Firm states that the attorney, Houston-based Robert Painter, apparently got the judge who issued the TRO on the phone, but the president of Heritage Auctions, Greg Rohan, refused to take the call, and Painter was ejected from the room.

Update 5-29: Apparently, they're in negotiations to determine the provenance of the specimen.

Update 9-12:  There's been a lot of activity in this case since last I posted.

In June, a judge in the District Court for the Southern District of New York issued a warrant for the arrest of the T.bataar skeleton, in response to a Verified Complaint issued by the United States attorney for the Southern District of New York.  The Complaint alleged various violations of federal law (Title 18), that there were misrepresentations in the import documents, that Mongolia had made it illegal to export fossils since at least 1961, and that the T.bataar had almost certainly come from Mongolia.

[Comment: The allegation of customs misrepresentations apparently derived from the facts that, apparently, the customs forms indicated a value of some $15,000, whereas the mounted skeleton sold for more than $1 million.]


A copy of the Complaint can be found here.  The case is United States v. One Tyrannosaurus bataar Skeleton 12-CIV-4760.

In August, Prokopi, the claimant (the guy in Florida who acquired the skeleton from England and who put it all together), filed a motion to dismiss, arguing that government's action was "unprecedented" and that

[i]n making its demand, the Government relies on a seriously flawed Complaint that: (1) assumes Tyrannosaurus bataar (“Bataar”) fossils are only found in Mongolia, when two of the Government’s own experts have said otherwise; (2) assumes that the Bataar fossils in this case were from one specimen and were shipped together from the United Kingdom to the United States, when the Government’s own experts who examined the Display piece knew or should have known that the Display piece was a composite; and (3) largely bases its “stolen property” claim on a confiscatory 1924 Soviet-era constitution and regulations that were superseded by a 1992 post-Communist constitution and laws that recognize private property rights and which do not vest ownership of all paleontological objects in the Mongolian State.

A copy of the motion is here.

[Comment:  The Heritage Auctions catalog copy indicated that the skeleton was "complete," although the body was only 75% complete and the skull was only 80% complete (This would still make it one of the most complete tyrannosaurs ever discovered).  This is apparently the first time we've had an explicit acknowledgement that the display skeleton is a composite].

On September 7, the judge issued an order allowing the government to file an amended Complaint, stating that "the proceedings...call into question some of the assumptions in the government’s Verified Complaint."  He further stated:


The government’s forfeiture case is premised upon the claim that the Defendant Property was shipped into this country based upon customs import documents which falsely stated the value of the shipment and falsely identified the country of origin. It also contends that the Defendant Property was improperly removed—smuggled and stolen—from the nation of Mongolia and that it should be returned to them as part of their cultural heritage.

In issuing the order, the judge questioned whether there had, in fact, been any fraud in the customs declarations:


The representations made on the record ... by claimant’s counsel call into question whether the Defendant Property was ever valued on a customs declaration as $15,000, as alleged in the Complaint . . . The $15,000 figure (or $19,000 as stated by claimant’s counsel) appears to have been the valuation for one of four shipments into the United States of dinosaur bones some of which were encased in non-organic material and required extensive and difficult cleaning. According to claimant’s counsel, approximately 50% of the organic material comprising the Defendant Property had been previously acquired by the claimant in the United States. The nearly complete skeleton (80% of the head and 75% of the body) depicted in the government’s evidence and sold at auction does not, according to claimant’s counsel, come from a single Bataar. Claimant’s counsel asserts that the four shipments together with the 50% material acquired in the United States were assembled by the claimant, Eric Prokopi, using his time, experience and talent, which greatly enhanced the value of the individual shipments.


[Comment: So the judge seems to be accepting the argument that the auction price reflects Prokopi's "sweat equity," as well as the value of whatever materials were added to make the mount.  In this regard, it's interesting to note that some of the paleontologists on one of the paleo listservs have wondered how much "added value" there could be, since the specimen's scientific value (e.g., documentation of site of origin and documentation and cataloging of the preparation procedures) has likely been ruined.].

The judge also expressed uncertainty as to whether it was reasonable to conclude that the T.bataar specimen came from Mongolia (and not, for example, China) and did so illegally:


The Bataar is said to be native to Nemegt Basin in the Gobi Desert in Mongolia. The Nemegt Basin is in the Ömnögovi province of Mongolia which borders with China. There is nothing before this Court which speaks to whether 70 million years ago it would have been implausible for the Bataar to have roamed the bordering territory, including present-day China, or whether geological formations in China (or other nearby nations) would have been conducive to preservation of such skeletons. The government represented that, thus far, substantially complete skeletons of Bataars have not been found outside of Mongolia but did not dispute claimant’s counsel’s representation that bones of Bataars—less than a full skeleton-- have been found elsewhere.

[Comment:  The Motion to Dismiss quotes an article/book by paleontologist Philip Currie, who is also one of the government's witnesses].

Finally, the judge noted that the statutes at issue require proof of actual criminal knowledge or intent:


Finally, certain of the statutes on which the government premises forfeiture have specific mens rea requirements. For example, the anti-smuggling provision requires the person who fraudulently or knowingly imports or brings the property into the United States—or receives it, must “know[] the same to have been imported or brought into the United States contrary to law. . . .” The prohibitions on transportation or receipt of stolen goods require the person to “know[] the same to have been stolen. . . .” 18 U.S.C. §§ 2314 & 2315. The Verified Complaint must set forth a basis for believing that some person who engaged in the prohibited conducted—not necessarily the claimant-- had the requisite knowledge.

The text of the judge's Memorandum and Order can be found here.

Posted by Greg Leitich Smith at 10:31 AM