Football, when death was on the line... 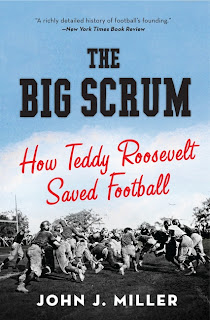 THE BIG SCRUM: HOW TEDDY ROOSEVELT SAVED FOOTBALL, by John J. Miller (Harper 2012).  In the late nineteenth and early twentieth centuries, as college football gained in popularity, it also gained in brutality: injuries and even death were common, rules were ad hoc at best, and officiating was even worse than in Monday night's Packers-Seahawks game.

Not surprisingly, there were calls to ban or even outlaw the game as dangerous and, especially, unfit for collegians.  But Teddy Roosevelt, a proponent of the strenuous life, felt the game's virtues outweighed its liabilities, and that America would never arrive at its proper place in the world if its college graduates were effete "mollycoddles."  So he summoned the coaches of Harvard, Yale, and other schools to the White House for a meeting which would set the course of the game's development into what it is today.

THE BIG SCRUM, although written for the "adult" market, should also engage young adult readers.  It offers a fascinating glimpse into the life of President Roosevelt, as well as explicating the early history of the game of football and its larger-than-life personalities.
Posted by Greg Leitich Smith at 10:50 AM