Last weekend, after we finished up WIFYR (which I will post about in greater detail later), Cyn and I took a day to check out the brand-new Rio Tinto facility for the Natural History Museum of Utah.  Overlooking downtown Salt Lake City, the place is gorgeous. 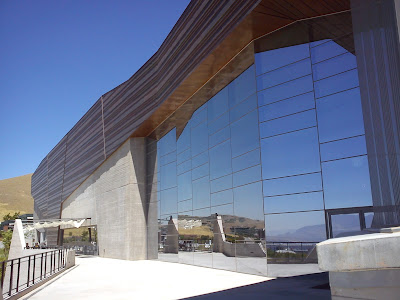 I particularly enjoyed the life-sized Cretaceous diorama featuring a troodontid scavenging a ceratopsian skull, and the wall of some 14 or so ceratopsian heads, showing the family tree, as it were.

Also notable is the display of a pack of juvenile Allosaurus attacking a Barosaraus.

In addition, the museum has a sizeable display of Cenozoic creatures, including the dire wolf and the Columbian mammoth, as well as a display of hominid evolution.

It was kind of neat seeing some of the creatures that feature in CHRONAL ENGINE, including T.rex, Ornithomimus, oviraptorids, Deinosuchus, and Parasaurolophus.

Here are some of the mounted skeletons: 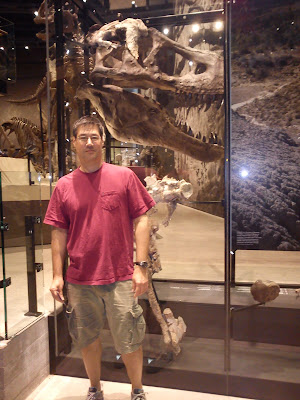