THE PROBLEM WITH BEING SLIGHTLY HEROIC 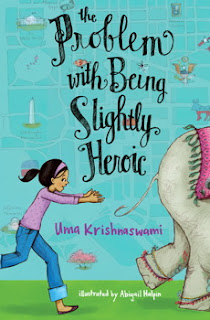 THE PROBLEM WITH BEING SLIGHTLY HEROIC, by Uma Krishnaswami (Atheneum/Simon & Schuster 2013)(ages 8+).  In this sequel to THE GRAND PLAN TO FIX EVERYTHING, Dini is back in America visiting her friend Maddie.  Even better, they're in Washington, D.C. for Bollywood megastar Dolly Singh's American debut.  But when Dolly loses her passport and the caterers refuse to make a cake with rose petals and the Smithsonian says "no" to getting an elephant for the party, will they ever pull off a spectacular worthy of Dolly's status?

THE PROBLEM WITH BEING SLIGHTLY HEROIC is wonderfully quirky and completely hilarious, offering rich characters and a zany look at the foibles of international stardom and celebrity.
Posted by Greg Leitich Smith at 7:28 AM