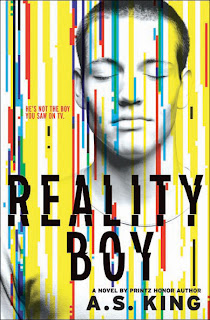 REALITY BOY, by A.S. King (Little Brown, October 22, 2013)(ages 14+).  At the age of five, Gerald and his anger management issues became a national sensation when his family appeared on the reality TV show, Network Nanny.  Infamous as a spoiled brat who who acted out by committing acts of vandalism through bowel movements (really), Gerald is now in high school, trying to control his anger, avoid fights, deal with his parents, and somehow move forward, even if that means jail.

Told in a compelling first-person voice, REALITY BOY is at once funny, horrifying, and heartwarming.  More than just an examination of the excesses of "reality" television, REALITY BOY offers the gripping story of a boy coping with an extraordinary past and hoping to salvage something from the wreckage of his childhood.
Posted by Greg Leitich Smith at 1:01 PM