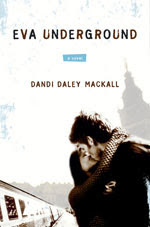 It's the late 70's and Eva Lott's senior year of high school. She'd rather be back home in Chicago than spending it in police-state Communist Poland. But her father is on a mission. Supposedly, he's there to teach, but he's really there to provide assistance with the anti-communist underground movement. The hardships and shortages that are a fact of life behind the Iron Curtain are bad enough, but it's worse knowing Big Brother is watching. Still, Eva begins to build a relationship with Tomek, one of her father's students, and with Poland as well. But even this is shattered when her father is deported and Eva must figure out how to survive behind on her own.

EVA UNDERGROUND provides a engrossing and sometimes chilling look into life in a totalitarian state, as Eva and her father struggle to make friends and learn a strange and foreign culture. With well-developed characters and plot, EVA UNERGROUND is much more than a social studies lesson, however. Mackall makes the struggles of daily life and against the police state apparatus in Communist Poland come alive.

Cynthia has an interview with Mackall on EVA UNDERGROUND here.
Posted by Greg Leitich Smith at 6:08 PM