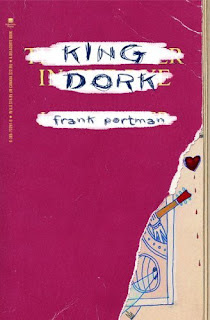 Tom Henderson, more commonly known as "Chi-Mo" to others and to himself as "King Dork," is, well, a guitar-playing dork trying to form a band with his best friend. When his English teacher assigns (of course), CATCHER IN THE RYE, Tom discovers a copy his deceased father had when he was a teen. The copy is marked up with mysterious messages, and Tom finds himself more or less obsessed with decoding the thing (in part because he's never felt any connection to the man, and in part because he is, after all, a complete dork). This leads him to read more books his father left behind and also to the mystery of how his father really died, as well as some insights into "attracting semihot girls."

KING DORK is hilarious. Portman skillfully skewers the Baby Boomers' obsession with THE CATCHER IN THE RYE while portraying a modern teen dealing with what a generation raised on that book has wrought. Professor Nana likes the names Tom and his friend come up with for the band; for my part, I love the pithy characterizations of the books referenced (e.g., LORD OF THE FLIES is "... like Hillmont High School meets Gilligan's Island, except that the goons in charge are prissy English schoolboys intead of normal redblooded American alpha psychopaths.").
Posted by Greg Leitich Smith at 12:48 PM