HENRY AND THE CRAZED CHICKEN PIRATES 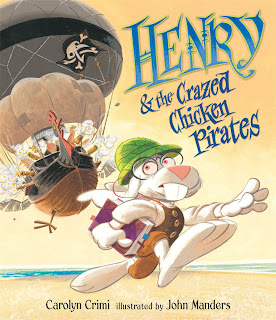 HENRY AND THE CRAZED CHICKEN PIRATES, by Carolyn Crimi, ill. by John Manders (Candlewick 2009). All seems to be well in buccaneer bunny land, until Henry discovers a message in a bottle: a threat to steal the bunnies' loot! The other bunnies pooh-pooh his concerns, until they are taken captive by the crazed chicken pirates themselves.

Fortunately, Henry knows that the way to success is through research and planning (and quick thinking and courage)! But can he single-handedly save his shipmates and fend off the crazed chicken pirates?

HENRY AND THE CRAZED CHICKEN PIRATES is a boisterous and funny bunny tale by the author and illustrator of HENRY AND THE BUCCANEER BUNNIES.
Posted by Greg Leitich Smith at 11:34 AM