THE RULE OF WON 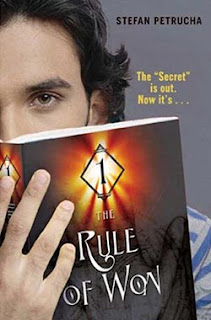 THE RULE OF WON, by Stefan Petrucha (Walker 2008)(12+). Caleb Dunne would aspire to be the best slacker ever, but that's too ambitious. But he begins to see the light when his ex-girlfriend makes him join a school club based on the phenomenal best-selling self-help book, The Rule of Won. But when the things they're "imanifesting" in their "Craves" begin to come true, he starts to worry, especially after the group starts to act like a fascist cult. Can he escape before it's too late? Does he even want to?

THE RULE OF WON is a sometimes funny and fascinating examination of group think and cargo cult reasoning; Caleb and his enemies and allies alike are well-rounded and sympathetic. Suspenseful and ultimately satisfying, as well as being a good read, THE RULE OF WON offers plenty to think about.

Cynthia has an interview with Petrucha here.
Posted by Greg Leitich Smith at 4:01 PM