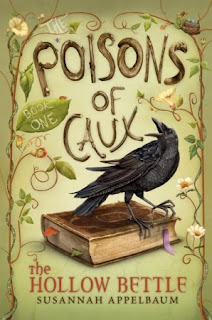 THE HOLLOW BETTLE: THE POISONS OF CAUX, BOOK 1, by Susannah Appelbaum (Knopf 2009)(8-12). King Nightshade rules the kingdom of Caux, in which poisoning has been raised to a high art. Everyone who can afford it hires a Taster to ensure that they don't inadvertently eat or drink anything that would be bad for them.

Eleven year old Ivy Manx's uncle, an underground apotheopath healer, disappears, leaving Ivy alone with the odious Taster, Sorrel Flux. Eventually, she flees with Rowan, a young and renegade Taster, to try to find her uncle. Can they survive the wilds and poisons of Caux with the king's men chasing them?

THE HOLLOW BETTLE is an entertaining fantasy set in a novel and sinister fantasy world. The protagonist, as well as the villains, are creepy and intriguing. Book 1 of 3.
Posted by Greg Leitich Smith at 9:42 AM

It was extremely interesting for me to read the blog. Thank you for it. I like such themes and everything that is connected to this matter. I would like to read a bit more on that blog soon.