Cyn and I are just back from attending the annual Houston SCBWI conference. A whirlwind, fun, and thought-provoking trip!

We drove up late Friday afternoon, had time to check into our hotel, and then made it over to the home of author Varsha Bajaj, who graciously hosted the kickoff party of Texas barbecue. We had a great time, and were happy to speak with Houston writers, authors, and illustrators whom we've met in passing over the years, but haven't had a chance to get to know. 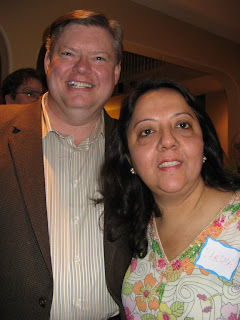 Saturday morning, we were up early and headed over to the Merrell Center. Cyn gave her very well-received inspirational keynote and then was whisked away to do in-person manuscript critiques.

Among others, at my table in the main room were author Anna Myers (she lives in Oklahoma, but was born in Texas, so we don't hold it against her), who Cyn and I have known for a number of years (I think we met for the first time back when Cyn was up for the Oklahoma Book Award for Jingle Dancer); Houston author and grande dame, Mary Wade (whom we've also know for years); and Oklahoma author Jeannie Hagy. We met Jeannie back in '05 when Cyn and I taught a weekend on Writing for Children at the Oklahoma Arts Institute at Quartz Mountain. 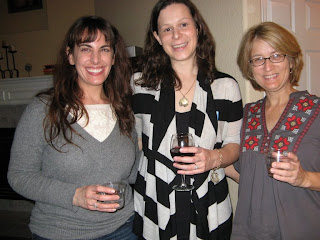 Ruta Rimas, editor at Balzer and Bray, spoke about the level of detail prospective writers should bring to craft. Patrick Collins, Creative Director at Henry Holt, spoke via example about developing covers for novels. Agent Sara Crowe discussed what to look for in an agent, and the components of the author-agent relationship. Alexandra Cooper, editor at Simon and Schuster, discussed what she looks for and the S&S acquisition process. Lisa Ann Sandell, editor at Scholastic, and an author in her own right, discussed writing and editing. National Geographic editor Nancy Feresten talked about how she sees the industry over the next 10-15 years.

Book sales were handled by Blue Willow book store, whose bricks and mortar location I'm embarrassed to say I've never been to. 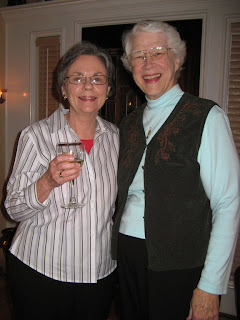 Afterwards, almost everyone trooped out to a Mexican restaurant nearby for fajitas. We had a great time talking and generally de-toxing after a terrific day. Then we slept for ten hours...
Posted by Greg Leitich Smith at 11:46 AM