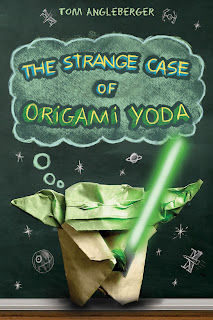 THE STRANGE CASE OF ORIGAMI YODA, by Tom Angleberger (Amulet, March 2010)(ages 8-12). To sixth-grader Tommy and his friends, Dwight has always been the oddest of oddballs. Sure, he always eats lunch with them, but it's still weird that he sits in holes and tries to get everyone to call him "Captain Dwight." But he's a wizard at origami and one day brings a Yoda finger puppet to school.

And when people start to ask Origami Yoda questions, the answers are thoughtful and sometimes helpful and totally unlike anything Dwight could've come up with on his own. Is Origami Yoda channeling the Force for real?

Tommy isn't sure, and now he has a problem. Should he ask Origami Yoda if Sara likes him? Should he take his advice? What if Dwight really is pulling a scam?

Told in vignettes that illuminate and test Origami Yoda's powers of prescience and the Force, THE STRANGE CASE OF ORIGAMI YODA is a brilliantly funny and zany novel, full of heart and wit and middle school agnosticism. Enjoy it readers will.

Check out the guest post, including the video on how to make your own Origami Yoda, by Tom Angleberger at Cynsations!
Posted by Greg Leitich Smith at 7:22 AM