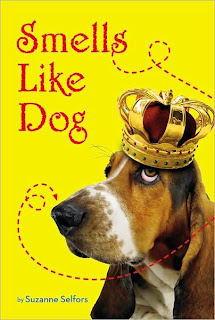 SMELLS LIKE DOG, by Suzanne Selfors (Little Brown, May 2010)(ages 8-12). Twelve-year-old Homer Winslow Pudding lives and works on his family's goat farm in remote Milkydale, but would rather be hunting treasure like his uncle, the famous treasure hunter Drake Horatio Pudding. When Uncle Drake dies in a tortoise accident, Homer is surprised to inherit his dog, a droopy creature with no sense of smell and wearing a mysterious coin around its collar.

Homer is soon propelled into mystery and adventure as he and his sister run away to the dangerous City, where they encounter the evil Madame le Directeur of the Natural History Museum, and Homer undertakes a quest to find a pirate treasure map with some of Drake's former colleagues.

SMELLS LIKE DOG is a fun and entertaining tale of misfits discovering where they belong. The tongue-in-cheek, over-the-top humor and voice mesh perfectly with the zany adventure.
Posted by Greg Leitich Smith at 11:56 AM