THE BOOK OF TORMOD: A TEMPLAR'S APPRENTICE 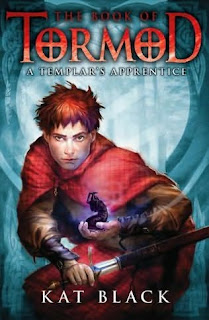 THE BOOK OF TORMOD: A TEMPLAR'S APPRENTICE, by Kat Black (Scholastic 2010)(12+). Thirteen-year-old Tormod MacLeod is the seventh of nine children, and the only one gifted with visions. He wants nothing more than to leave his remote village, and gets the chance when a Templar Knight appears and assigns him an errand involving delivery of a scroll and a map.

Now irrevocably caught up in Templar intrigues, Tormod flees with the knight to the Continent on a quest to find the Templar Grand Master and seek the treasure whose location is defined by the map - a treasure that they must, at all costs, keep out of the hands of the king of France.

A gripping historical fantasy, A TEMPLAR'S APPRENTICE offers a compelling protagonist, terrific voice, period detail, and a rousing adventure. First in a series.
Posted by Greg Leitich Smith at 6:39 AM