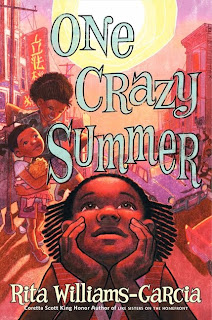 ONE CRAZY SUMMER, by Rita Williams-Garcia (Harper Amistad 2010)(ages 9-12). In the summer of 1968, eleven-year-old Delphine lives in Brooklyn with her father and grandmother and two younger sisters, Vonetta (9) and Fern (7).

Delphine is the responsible one: organized and polite and always getting her sisters to behave, even if she can't stop all their fights before they begin.

And when thier father decides the girls are to spend a month out in Oakland, with their mother Cecile, who walked out on them years before, Delphine will be put to the test. Cecile's not like ordinary mothers: she never hugs and she never lets any of the girls into the kitchen. All their meals are at the Black Panther community center or Chinese take-out. Worse, Cecile seems to hate their being there or the fact that the girls exist at all.

Can Delphine keep her even keel while everything and everyone around her seems to be going crazy?

ONE CRAZY SUMMER is insightful, poignant, disturbing, and, occasionally, funny. Williams-Garcia does an outstanding job of framing the turbulent era, while at the same time keeping the focus on, and the perspective of, Delphine herself. More than a period piece, ONE CRAZY SUMMER is, ultimately, an affecting and illuminating story of family and responsibility.
Posted by Greg Leitich Smith at 1:17 AM