THE RISE OF RENEGADE X 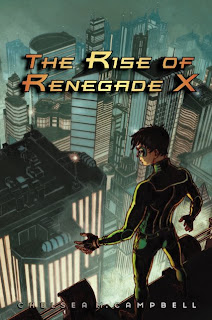 THE RISE OF RENEGADE X, by Chelsea M. Campbell (Egmont 2010)(12+). Damien Locke, son of the mad scientist "Mistress of Mayhem," has his life planned. Once his powers develop, he'll attend Vilmore Academy and learn how to take his place in the front ranks of those villains opposed to the superheroes of Golden City.

But at his coming-of-age ceremony on his sixteenth birthday, Damien discovers, to his horror, that his father -- whom he never knew -- was not a failed archvillain, but of all things, a superhero.

Then, even worse, his mother makes him go live with his father and his half-siblings. While she's plotting to take over Golden City, Damien is stuck in a family of do-gooders, with a half-sister who hates him...Can he avoid their clutches to rendezvous with his villainous destiny?

Funny and wry, THE RISE OF RENEGADE X is an exciting and engaging novel of secrets, family, sometime heroism, consequences, and free will.
Posted by Greg Leitich Smith at 6:17 AM