Whininess is the kiss of death. 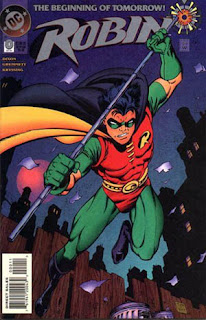 In his essay "Go Big or Go Home," reprinted in A FAMILY OF READERS: THE BOOK LOVER'S GUIDE TO CHILDREN'S AND YOUNG ADULT LITERATURE (Candlewick 2010), Roger Sutton opines that "what reluctant [boy] readers don't want are books filled with interpersonal emotional drama...It's not that boy readers are afraid of emotions, exactly, it's that they want to feel them in service to high stakes...Boys like to think Big."

I was thinking about this in context of Robins I, II, and III.

Robin I, you will recall, was Dick Grayson.  Robin III was Tim Drake.

Both Dick Grayson Robin and Tim Drake Robin are much loved by the fandom and are among the most popular characters in the DC Universe.

Robin II was Jason Todd, whom the fandom voted to kill off.

Let me address this in context of Tim Drake-Robin and Jason Todd-Robin -- both started off having to fill the shoes of Dick Grayson, but one is liked and the other, really, really not.

I think most of it goes back to Roger's statement above.  Tim Drake-Robin is not insensitive -- he is concerned about his girlfriend's safety and is sometimes miffed by Batman's treatment of him and others.  He, like all the Robins, is an orphan.  But his emotions serve higher stakes -- the fight against evil and his ambition to become the next Batman.

Even better, he is smart, funny, likeable, can use computers, and can kick butt when necessary.  He came to be Robin by figuring out that Bruce Wayne is Batman and is the leader of his generation of superheroes, a position that no one questions.

In contrast, Jason Todd's tenure as Robin was filled with overwrought emoting and Sturm und Drang. Granted, when Bruce Wayne is your "father," a certain amount of this is justified (Dick Grayson Robin rebelled rather memorably on several occasions), but there are limits.

Now, even boy readers want a character to have emotional depth, but at some point "interpersonal emotional drama" becomes off-putting melodrama and self-indulgent navel-gazing.  As exemplified in A Death in the Family, Jason Todd-Robin was pointlessly reckless, and endlessly and annoyingly self-absorbed and whiny.

To me, this is the kiss of death for any protagonist but particularly for a boy protagonist who is supposed to appeal to boy readers.
Posted by Greg Leitich Smith at 12:13 PM

Greg, you are spot on.

Guys wan tot be inspired by those who like to "kill something big".. our primal instincts and or be a part of an event or circumstance larger than themselves; but that has a common good associated with it.