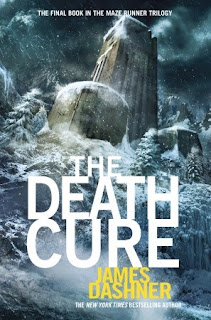 THE DEATH CURE, by James Dashner (Delacorte 2011).  In this follow-up to THE MAZE RUNNER and THE SCORCH TRIALS, Thomas and the Gladers, having survived the challenges of the Maze and the gauntlet of the Scorch Trials, are now confronted directly with those behind WICKED itself.

Although told their trials are over, Thomas doesn't know whom he can trust.  When some of his memories begin to come back and when he learns that WICKED is planning another set of trials with another set of Immunes, he knows he has to do everything in his power to destroy WICKED.  But what can a handful of Gladers do to take down the most powerful organization on the planet?

THE DEATH CURE offers edge-of-your-seat excitement and dystopian chills, while providing a satisfying conclusion to the trilogy and Thomas's story.

Update:  James Dashner will be appearing at the Texas Book Festival on Saturday, October 22 from 12-12:45 in Capitol Extension E2.014.
Posted by Greg Leitich Smith at 7:10 AM