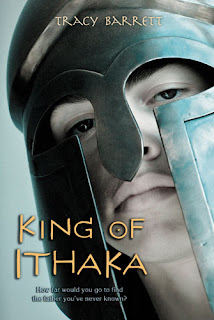 KING OF ITHAKA, by Tracy Barrett (Henry Holt 2010)(ages 12+).  Telemachos's father Odysseus has been gone nearly his entire life - at first in answer to King Agamemnon's call to fight the Trojans, but since then, no one knows where.   Still, for the most part Telemachos has had it easy.

Now, he must step up and leave Ithaka to find his father, or the kingdom (and his mother) will be lost to them.  Accompanied by the centaur Brax and the young stowaway Polydora, he sets off to the mainland and on his quest...

KING OF ITHAKA offers an exceptional voice that evocatively captures Bronze Age Greece as it retells The Odyssey of Homer. The setting is richly drawn and the character of Telemachos is compelling and believable.  In short, KING OF ITHAKA is a winning historical fantasy with just the right amounts of action and humor.
Posted by Greg Leitich Smith at 8:16 AM