FOR THE BIRDS: THE LIFE OF ROGER TORY PETERSON 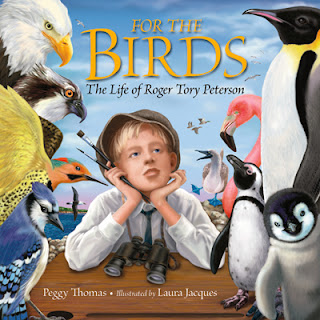 FOR THE BIRDS: THE LIFE OF ROGER TORY PETERSON, by Peggy Thomas, ill. by Laura Jacques (Calkins Creek/Boyds Mills Press 2011)(ages 8+). As a child, Roger Tory Peterson (1908-1996) was considered a bit of an odd bird.  He'd spend all his time exploring the woods in his small town, bringing home nests and wildflowers and butterflies and moths.  Early on, though, he became enamored of birds, and studying them and drawing them became his life's work.  Ultimately, he would become one of world's foremost ornithologists, and in 1934 would publish the first of the famous Peterson Field Guides.

FOR THE BIRDS provides a thoroughly fun and evocative introduction to the life and work of one of the premier naturalists of the 20th Century.  The text is compelling and the art is realistic and richly detailed.
Posted by Greg Leitich Smith at 5:23 PM