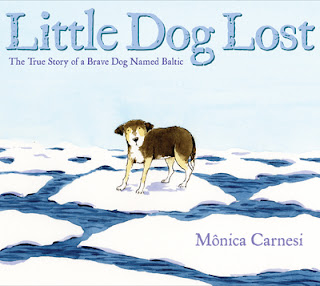 LITTLE DOG LOST: THE TRUE STORY OF A BRAVE DOG NAMED BALTIC, by Monica Carnesi (Nancy Paulsen Books/Penguin 2012)(ages 3-5).  In January 2010, a little dog was seen floating on an ice flow in the middle of the Vistula River (Poland), some sixty miles from the Baltic.  Attempts to rescue him proved fruitless.  Two days after he was first spotted, the research vessel Baltica, fifteen miles off the coast, spotted him.  Several attempts and dunkings later, he was brought aboard, and is now an honored and dry member of the crew.


Read an interview with Monica on Cynsations.
Posted by Greg Leitich Smith at 7:16 AM

We've got similar taste in reading this week! I reviewed LITTLE LOST DOG today after picking it up on Monday.

Nice review by the way!!