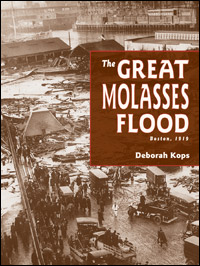 THE GREAT MOLASSES FLOOD; BOSTON 1919, by Deborah Kops (Charlesbridge, February 2012)(ages 8-12), offers a fascinating look at one of the weirdest incidents in Boston's history. On January 15, 1919, a two million gallon tank of molasses explodes, destroying buildings and drowning a small Boston neighborhood in sticky goo.  Altogether, twenty-one people would die in this freak accident.

In compelling fashion, Kops covers the story first from the perspective of individuals affected on the day itself -- men, women, and children going about their daily business until buildings collapsed around them and they were swamped in the viscous mess -- and then the tragedy's aftermath, including the subsequent lawsuits and testimony.  Sidebars provide additional period context and flavor.

Posted by Greg Leitich Smith at 10:29 AM